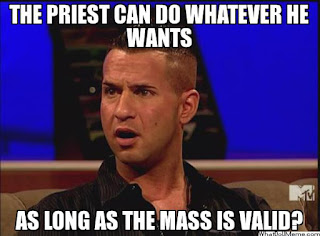 Roman Catholics are a fundamentally aliturgical people. That is not a malicious observation, it is an observation based on history and personal experience and it is essentially why they have no idea about how to remedy (if that is even possible) their liturgical crisis. If you'd care to read yet more tripe from Professor Kwasniewski you may understand where I'm coming from. Like most traditionalists, he goes on about really ephemeral things, like Latin, or "Gregorian" chant while ignoring the weightier matters such as celebration facing the wrong way, the historic and contemporary neglect of Divine Office and the kalendar reforms. With regard to Latin, I like Latin. I am a Latinist myself, I prefer it to Greek; I enjoy reading mediaeval and liturgical Latin, I enjoy Latin polyphony. But Latin is, lamentably, a dead language. There's no question about that. Furthermore, you cannot argue that Latin is any more or less expressive of divine truths than English, or any vernacular tongue in common use. To do so is not necessarily an Ultramontane tendency but it is prejudicial to the riches of the common tongue. As W.H Auden said, "even a child can be taught what the quick and the dead means;" moreover the Coverdale Psalter has retained the Latin incipits of the Psalms which surely demonstrates both continuity and intelligibility. Unfortunately, the English officially sanctioned for use in the Roman Catholic communion is of a postcard/train timetable quality, utterly pretentious and artificial. The reasons for that are manifold but can be traced ultimately to the decision by the Council of Trent to forbid vernacular worship.

With regard to Gregorian Chant, it can be attractive (particularly in some antiphons) but the bulk of it is a mongrel, syllable-by-syllable monody produced by the monks of Solesmes in the 19th century. I do not question the need for musical integrity and quality in liturgical worship but much of the officially sanctioned chant for use in the Latin rite is early 20th century; Tra le sollecitudini and all that. And blast Mgr Perosi for his attitude toward the Castrati!

And the Kalendar. The Gregorian Kalendar is here to stay. It would be inconceivable for Rome to abandon its use and adopt the venerable Julian Kalendar but the real issue here are the kalendar reforms. There have been countless in the history of the Roman Rite. It is not unlikely that every pope since Trent has left his mark on the universal kalendar. Where do you draw the line? Do we accept kalendar reforms that have passed out of knowledge and living memory, like those of Pius IX, Leo XIII and Pius X (if they are at all relevant to most practitioners of the Roman Rite to-day)? Or, for those who use the so-called "extraordinary form," what of the reforms of Pius XII? The beginning of May is an especially relevant time to question those reforms. We have seen how Joseph the Worker supplanted the festival of the holy apostles Philip and James, fixed on May 1st since antient times. On 3rd May was the coeval feast of St John before the Latin Gate, kept in Cranmer's godly order but abolished by Pius XII. What tributaries to "the apostolic truth and constancy of what we celebrate," to borrow that phrase from the NLM article? What is truly a mark of catholicity and of ecumenical significance? Leave out the ARCIC declarations for a moment and the patsy status of the Church of England; if you meet an old-fashioned Anglican on 1st May and you have a conversation about faith, you're already on common ground in celebrating the same feast day. This is how bridges are built! Something substantive and traditional is a predicate. Do not insist upon the latest papal fiat simply because of what Mediator Dei declares about the liturgical authority of the Roman see. That is what leads to estrangement and hatred. Albeit they had disparate views on theology but it heartens me to think that Tolkien and Lewis shared a more or less analogous kalendar of saints days for many years of their remarkable communion.

It seems to me that the remnants (and they are incredibly small and sundered) of Roman liturgy are drowning and Professor Kwasniewski is just describing the water.
Posted by Patrick Sheridan at 9:00 am
Email ThisBlogThis!Share to TwitterShare to FacebookShare to Pinterest