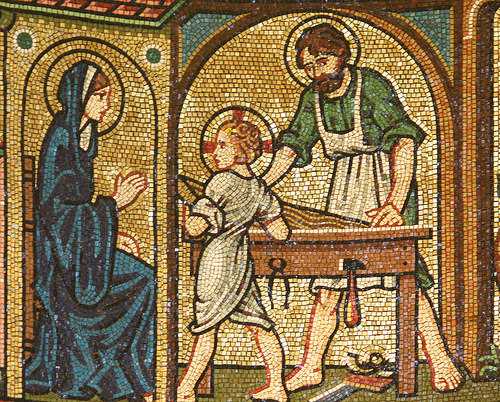 How ironic that this feast is constituted non odia exacuat ac iurgia accendat, that is not to sharpen hatred and to kindle (legal) disputes (think of that what you will) when, ostensibly that is all it has actually achieved. This antient feast of sixty years standing has to be one of the most divisive aspects of the so-called "Extraordinary Form," and undoubtedly one of the most hideous liturgical reforms of the 20th century. And it proves not just that the Papacy itself is a force for evil in the Church, and just as constant and deferential of tradition as the world in which it is set, but that the traditionalists who maintain and support the papal rite are themselves the very enemies of Tradition. The holy apostles Philip and James have been commemorated on 1st May since the sixth century; Joseph the buck-toothed socialist peasant in the dole queue (a latter day Wat Tyler) since 1956. Let's put this in the form of a syllogism: Traditionalism means adherence to Tradition and abhorrence of innovation; 1st May is traditionally the feast of the holy apostles Philip and James, that of Joseph the Worker is an innovation; therefore the feast to be celebrated on 1st of May, according to Tradition, always, everywhere and without exception, is that of the holy apostles Philip and James.

And I have said nothing about the quality of the antiphons or the Mattins (if you can call it that) lessons or the blatant capitulation to socialism inherent to this cheap and grotesque feast. It reminds me of when Leo XIII called upon the French to "rally to the Republic." And now Saint Joseph, one of my patrons, is to be identified with trade unions, industry and the trolley boy with the rash at your local supermarket. All peasants in the same socialist stew, but endued and sanctified with the Christian life upon gathering in St Peter's square to inwardly digest the wise words of good old Pacelli, teacher of all Christians, sweetest of pontiffs and friend of the working man. Joseph the working man is so great that he ranks higher than the feasts of royal saints in the martyology, like Louis IX who built the Sainte Chapelle (the only good fruit of the Fourth Crusade), Margaret of Scotland or Charles the Martyr. But in the modern world of socialist republics and trade onions (that is not a typo), what use are they? Rome must appear relevant to modern times.

Equally, in all seriousness, what use is there celebrating Joseph the Worker? The idea was that Rome would sanctify the workplace and turn it into a model of the Kingdom of God but do any of you think that the corporate minds that are the engines of civil power to-day care one bit about the patronage of their new peasant saint? To celebrate this feast is very much to move with the times and one would have thought that Rocks (tu es petrus...) shouldn't really move anywhere. But to come back to the propriety of the feast, anybody who celebrates the feast of Joseph the Worker is a philistine and heretic, as far as I'm concerned. And if they are traditionalists, as most of them are, then they are disingenuous liars and sycophants who have sacrificed their integrity on the altar of Ultramontanism.
Posted by Patrick Sheridan at 11:04 am
Email ThisBlogThis!Share to TwitterShare to FacebookShare to Pinterest