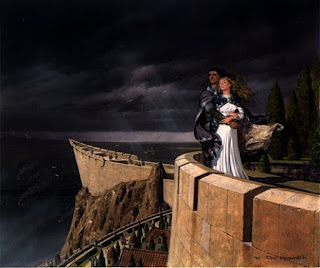 "Riding one day in the forests of the Westlands he saw a woman, whose dark hair flowed in the wind, and about her was a green cloak clasped at the throat with a bright jewel; and he took her for one of the Eldar, who came at times to those parts of the Island. But she approached, and he knew her for Erendis, and saw that the jewel was the one that he had given her; then suddenly he knew in himself the love that he bore her, and he felt the emptiness of his days." Unfinished Tales of Númenor and Middle-earth, part II, chapter II.

Tolkien's legendarium is essentially the story of decline. As the ages pass, so too does the wonder, and knowledge of God among men. To put it another way, with time comes the declension of myth to mere history, from the divine music of Creation and the echo thereof to stale oblivion and the humdrum of modern life. Remember what the Ainulindalë says about the music of water and the sons of Men; that they listen unsated by the shores of the sea and yet know not for what they listen. Or the words of Legolas when the Fellowship entered Hollin in the winter of the year, that the very stones had forgotten the Gnomes who dwelt and laboured there of old. The Quenya name for Gondolin, Ondolindë, meant the "rock of the music of water." It was a city, the fairest of song, built in honour of the Music of the Ainur and a memorial of antient Tirion. Its destruction can therefore be seen as not the mere display of power and triumph but as symbolic of the everlasting strife of the Diabolos with Creation, with the Music, with the Logos (or the "Flame Imperishable"). Except where, in such places as the monastic House of Elrond, antient days, deeds of valour and the truth are recalled in song and reverent memory, elsewhither men are indifferent and ignorant, even hostile to that memory and it is therefore gone from the land. Yet, "when thou lettest thy breath go forth, they shall be made; and thou shalt renew the face of the earth," (Psalms 104:30).

The renewal does not come to pass with the fall of Sauron. The field of Cormallen was not Pentecost! In fact Elessar, the last of the true Númenóreans, had to be corrected by Treebeard when he said that the deeds of the Ents would never be forgotten in Minas Tirith or in Edoras. "Not while your kingdoms last, you mean," he said. And indeed, with the new age came the departure of the ring bearers, the sailing of the white ship and the passing of the burden of knowledge, of guardianship to the Kings of Men. Lothlórien was no more; the madrigals were no more sung in the fair valley of Rivendell; the high elves were no longer seen passing through the woods of the Shire. And, taking Treebeard's ominous words and Tolkien's unfinished "sequel" The New Shadow to heart, one can reasonably suppose that within a few generations the lore of the West begun a slow decline again, passing out of living memory and therefore ceasing to be relevant even under the kingship. No, the true renewal of Middle-earth is alluded to in the Athrabeth Finrod ah Andreth, which is a story of the First Age as told in The History of Middle-earth. Andreth, a wise woman, told Finrod, a lord of the Gnomes, about a prophecy among Men which was that the only remedy for the evil of Morgoth was with God himself and that he would himself enter into Arda at some point to renew the earth to the end that what was said of the divine music before the world, that "it was blended with an immeasurable sorrow from which its beauty chiefly came," would be realised. O felix culpa indeed.

If this is incomprehensible, my apologies. These are ideas that go round my head as I do routine things like wash the dishes. In fact, this post grew in the telling. I had initially planned on just leaving the quote from Aldarion and Erendis as it is, since it is, for me, the most beautiful moment of that story. I suppose the significance of that is that it represents decline. I have always imagined it to have been in the fall of the year, the leaves falling and blowing on the wind. It was certainly a story of when Númenor was young because the Eldar did not go to the island under the Shadow. Anyway, just a few thoughts for Whitsun.

Art: Ted Nasmith. "It reminds me of Númenor."
Posted by Patrick Sheridan at 11:44 am
Email ThisBlogThis!Share to TwitterShare to FacebookShare to Pinterest