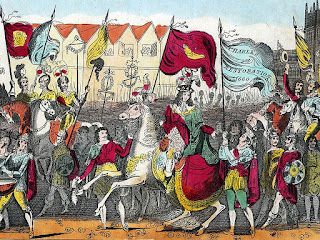 The trouble with anniversaries (and we all...well most of us like them) is that nobody gets them right. To-day, if you look at the pew sheets at Westminster Abbey, is Oak Apple Day, the birthday of Charles II and the Restoration of the Monarchy. Only it isn't. In 1660, Catholic England (rather than Papist Europe...no pedantry, please) followed the venerable Julian Kalendar. Very few remember the significance of the Restoration, or even care about it, but fewer still care to remember that in those palmy days of substance and conviction (I say that because we look back from the dark days of political correctness) we followed a different kalendar altogether. Still, I doubt I'll remember to post something in two weeks so I'll let John Evelyn do the talking:

"This day came in His Majesty to London, after a sad and long exile and calamitous suffering both of The King and Church, being seventeen years. This was also his birthday, and with a triumph of above twenty-thousand horse and foot, brandishing their swords, and shouting with inexpressible joy; the ways strewn with flowers, the bells ringing, the streets hung with tapestry, fountains running with wine; the Mayor, Aldermen, and all the companies in their liveries, chains of gold, and banners, Lords and Nobles, clad in cloth of silver, and gold, and velvet; the windows and balconies, all set with ladies, trumpets, music, and myriads of people flocking, even so far as from Rochester, so as they were seven hours in passing the City, even from two in the afternoon till nine at night.

"I stood in the Strand and beheld it, and blessed God.

"And all this was done without one drop of blood shed, and by that very army which had rebelled against him. But it was the Lord's doing, for such a restoration was never mentioned in any history, ancient or modern, since the return of the Jews from their Babylonish captivity; nor so joyful a day and so bright ever seen in this nation." (From the Diary of John Evelyn, 29th May 1660).

I trust our friends in the Ordinariate added a collect for The Queen to their masses this morning?

God save The Queen!
Posted by Patrick Sheridan at 11:30 am
Email ThisBlogThis!Share to TwitterShare to FacebookShare to Pinterest