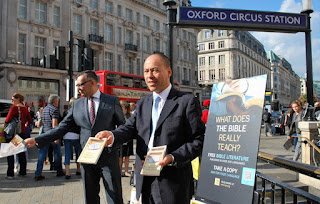 As I came home from work this morning, I passed a middle-aged man in my neighbour's driveway who bid me a good morning. Like one of Bilbo's utterances I greeted him in like fashion, and then I noticed two women holding files and dressed like proprietresses of the funeral home and I realised what they were. I couldn't pretend to not be in as they were standing in front of the porch door so I said: "good morning, can I help you?" And they then introduced themselves as Jehovah's Witnesses, adding for good measure: "you've probably seen us about before." They first of all quoted James 1:19, saying: "Know this, my beloved brothers: Everyone must be quick to listen, slow to speak," from their own translation, and I thought a very resourceful way of compelling people to shut up and listen, so I let them speak. They asked me if I had any religious beliefs, and I said: "I am an Orthodox Christian." This made almost no difference to the conversation as they were clearly following a prescribed method, which I made every effort to disrupt. I told them what I thought of Charles Taze Russell (I can't remember exactly what I said but the words "charlatan" and "renegade" were used; and also that "nothing good ever came out of America"). They asked if I ever said The Lord's Prayer, which of course I do, and I made sure to remind them of the real words as found in the 1662 Book of Common Prayer, and then asked what I thought was meant by the petition: "hallowed be thy name." I thought for a second, thinking this was a genuine question, so I said: "well, name-worship is an absurd heresy, and I don't believe it is appropriate to..." and then I realised what they were up to, and also that they hadn't listened to a single word I had said, so I cut off and said: "I see where you're going with this but you will not convince me that God's Name is to be invoked without full purpose and reverence."

We had reached a stalemate but the other lady (she must have been about 80) then asked what I thought of the present state of Christianity. So I said: "well, dead, frankly." At last we agreed! I then pointed out the reasons why, chiefly blaming the Papal Communion, and then said that I had actually written to Mr Putin asking him to invade us and annex us to Russia, and to send as many priests and monks as he could spare to convert us. This seemed too outlandish, even for them. The old lady then got out her umbrella from her bag as it started to rain, which seemed as good a moment as any to say: "well it's been pleasant chatting but I really must be getting on." They did promise to come back so I said "please don't," and went in to make some tea.

That was the first time I have ever had a conversation with a Jehovah's Witness. Most of our interactions to date have been "we're not interested," but those have invariably been answering the door from inside. But I do wish I had been more prepared. They had come to convert me, or to at least arouse some interest in their religion. I simply defended myself against proselytism, without having made much of an effort to bring them into the Church (it would have been a good idea to have mentioned the Sunday just gone, which was the commemoration of the 318 Holy Fathers of Nicaea who, under the inspiration of the Holy Ghost, defined the Divinity of Christ, but I forgot). On this basis our interaction was a complete waste of time and in the balance it would probably have been better over all to have simply ordered them off my father's land without engaging them. The marrow of their bones has been filled with erroneous doctrine and I am in no position to evangelize myself.

What are Jehovah's Witnesses? Are they dangerous? Or a harmless nuisance? To me, as to my readers, I am sure they present no real threat. As I told them in my own words (which I don't remember), I am not interested in restorationist, Protestant, conspiracist movements which make bogus claims and predictions. As Scripture says: "When a prophet speaketh in the name of the LORD, if the thing follow not, nor come to pass, that is the thing which the LORD hath not spoken, but the prophet hath spoken it presumptuously: thou shalt not be afraid of him," Deuteronomy 18:22. But to others, wayward in their beliefs, these cults present a real danger, and the danger of blasphemy. Now, in terms of the hierarchy of dangerous religions, as it were, you may say that the Jehovah's Witnesses do not come close to militant Islam. Nonetheless there is a demonic undertow to this religion which far outbalances two seemingly kindly ladies in plain raiment and in our contest for mastery over the Mujahideen it suffices to say that these people don't help. How do you treat them, then? Is "sorry, we're not interested" enough?
Posted by Patrick Sheridan at 12:28 pm
Email ThisBlogThis!Share to TwitterShare to FacebookShare to Pinterest