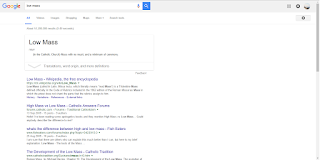 It's not often that I look at Rorate Caeli these days. This is why. Surely the essence of Christian worship is its common (or "corporate") nature? "For where two or three are gathered together in my name, there am I in the midst of them," saith The LORD; not "where a bent old priest mumbles to himself from a book, facing a brick wall." "New Catholic" says:

"Sacrifice. Silence. Like the simple seven words on Golgotha. The essence, before our very eyes: the epitome of unplanned and truly organic development - Roman order and terseness displayed forever and everywhere."

Low Mass is indeed "sacrifice," but it is not a sacrifice of praise; it is the sacrifice of right worship on the altar of Popery. It is indeed "silent," but the silence is not holy (or even golden), it is the silence of choirs singing with voices and the choir books, diaconal vestments, &c. gathering dust as the memory of right worship wanes with each generation. Since the days of Durandus, Roman controversialists have ascribed mystical and mythical attributes to their erroneous worship. "New Catholic's" comparison to the seven last words is just another one. All these "organic" developments have just turned out to be abuses in various forms, like the denial of the chalice and the maintenance of Latin long after it had expired as a lingua franca, or even a language of lore. And as for Roman terseness, and order, I'd have thought some of the older antiphons and collects would better fit that description. Low Mass is a liturgical abuse. That is as true as the grass is green and the sky is blue. It is defective worship that destroys holiness and the catholicity of the Church, and the only reason traditionalists like it is because it is one of those things, like the "immaculate conception," the universal jurisdiction of the pope, Latin, &c, &c that distinguishes them from other Christians. If the ungodly fruits of enforced clerical celibacy are a generation of perverse priests then the evil fruit of low Mass is (or rather was) the noose around the Western liturgical neck. It only took the pope to kick away the proverbial stool, in whatever year you like, 1588, 1629, &c. with a fantastical display of the rightness of his jurisdiction.

Image. A simple screenshot. I had thought to find a typical devotional painting of low Mass, and typed into Google, and Google provided a "terse" and "ordered" answer: "(in the Catholic Church) Mass with no music and a minimum of ceremony." And you'd think only fundamentalist Protestants and Wahhabi/Salafist Muslims despised music and ceremony.
Posted by Patrick Sheridan at 9:26 pm
Email ThisBlogThis!Share to TwitterShare to FacebookShare to Pinterest