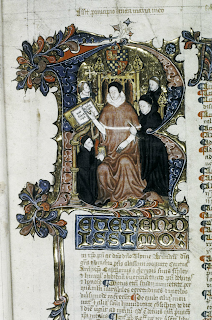 You might say that at 28 years old I am too young to be cynical but it just won't happen. It was a pipe dream from the days of Cardinal Wiseman. Cardinal Bourne believed that the "conversion" of England was still possible but was foiled in that hope. And, disturbingly like Zionism, people keep trying to pretend that this "conversion" is, or will be, a "return" to something; a return of English allegiance to an older, purer faith; which is a superstitious, anachronistic fantasy at best. There is no return. Return to what? The Roman Catholic Church didn't exist when the Church of England acknowledged the Roman primacy. If you'd said to somebody like William Langland "Roman Catholic," he'd probably stare blankly at you. He belonged to the Church of England, Ecclesia Anglicana, which had her own origin, her own venerable history, her own saints, her own liturgy, her own ritual, her own sacred canons, her own legislatures and laws, her own hierarchy; all distinct from the Roman, in varying degrees. Or perhaps I am being too technical. Well, let's just say that Rome to-day is unrecognisable. The so-called "barque of Peter" has come to resemble that galley of the legendary Theseus, which the Greeks professed to shew even after the time of Alexander the Great, but which, whatever its origin, had been so patched up and renewed by successive patchings, that not one antient plank remained in it, although they claimed it was the same ship.

If we're talking about a corporate reunion then I imagine Rome to be so unprincipled to-day that it would accept the women priests too. Pius IV is said to have offered Queen Elizabeth to sanction the Prayer Book and her legitimacy if she simply acknowledged his supremacy. That's all Rome cares about.
Posted by Patrick Sheridan at 2:14 pm
Email ThisBlogThis!Share to TwitterShare to FacebookShare to Pinterest