I watched (part of) the pagan, diverse and utterly boring service of thanksgiving for HM The Queen's 90th birthday yesterday. Did anybody else pick up on the subtle inclusion of a German anthem? Ostensibly to remind Her Majesty of her German ancestry but in the midst of a very controversial, and certainly heavily biased, campaign to remain within the European Union I thought it was a breach of impartiality.

Look at the picture above. Apart from readings given by unprincipled, incompetent politicians, lesbians and atheists they just had to drag every religious and ethnic minority on at the end. But I wonder sometimes just how different that makes the Church of England from other fallen institutions, like the Roman Catholic church, or the Phanar. Look at these pictures below and tell me if they have not sold their souls. 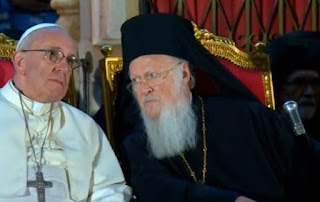 "Don't worry, master, we'll constrain the churches into a pan(theistic) synod before long..." 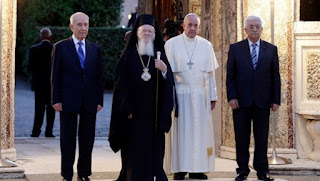 (Left to right) A Jew, a (presumable) Christian, a blasphemer and a Muslim. We're all the same really... 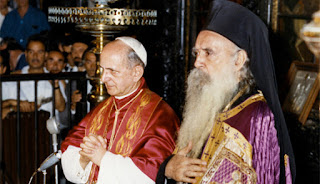 Two Freemasons together. Spiritual fornication with the Antichrist. 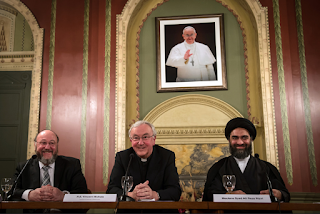 One world religion, one world government, under the authority of the man in the picture. Jews, Christians, and Muslims, all world religions melded into one, with the pope as supreme.

What do the ordinary people think of all this? Do people really care about diversity, or joint declarations, or prelates embracing and supposed historic milestones? Because I don't, and I am deeply suspicious of them. It does seem to be a power thing, a thing that men (and not seldom women) of power have in solidarity, and a "let the people eat cake" attitude. Who cares what we think! We're only the faithful, and the electorate; we're just ignorant, prejudiced rabble.
Posted by Patrick Sheridan at 3:17 pm
Email ThisBlogThis!Share to TwitterShare to FacebookShare to Pinterest