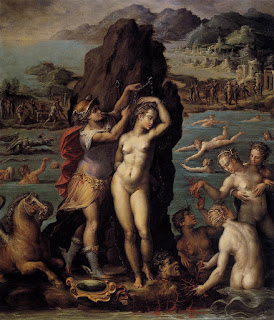 "Woe unto them that call evil good, and good evil; that put darkness for light, and light for darkness; that put bitter for sweet, and sweet for bitter!" Isaiah 5:20.

"In that day the LORD with his sore and great and strong sword shall punish Leviathan the piercing serpent, even Leviathan that crooked serpent; and he shall slay the dragon that is in the sea." Isaiah 27:1.

What a weekend to read the great Isaiah! Now would be a good time to read the whole of chapter three.

As I progress along as narrow a path as I can tread towards Orthodoxy I am struck by how little I now care about the Union of Great Britain. I see it now as one of the more unfortunate legacies of the Norman Conquest, when the Kingdom of England was absorbed into a European, feudal hegemony, against the will of the English, under the dominion of the pope of Rome (who was really the first President of the European Commission), with disastrous consequences for the English language, custom, law, church and so on. And there are many similarities throughout the subsequent history of these islands; "the Pale" in Leinster, the Pilgrimage of Grace, the Jacobite risings, the disestablishment of the Church of Ireland. British entry into the Common Market is another example. But British secession therefrom will be the first to break this unfortunate tendency, and is therefore a great boon for English people, even if they don't yet understand this. Where some see this as a kind of Gunpowder Plot or Pride's Purge, I see this as a new Reformation, even a Restoration, and we can certainly see the obvious parallel between "Brexit" and the Peasants' Revolt. I hope "Brexit" is more successful!

Now there are those who say that the attitude of "Brexiteers" is small-minded, isolationist, generally backwards. One of my correspondents quoted that famous poem by John Donne (without, incidentally, saying anything else):


No man is an island,
Entire of itself,
Every man is a piece of the continent,
A part of the main.

That says more to me about human solidarity in general than the European Union, which is so corrupt and dictatorial that it deserves to collapse. In Donne's time the continent was still largely under another corrupt and dictatorial union, the Papal Communion, while we British, for the first time since the Norman Conquest, enjoyed the liberty of the Gospel. Using Donne, who rejected that corrupt union by joining the Church of England, to bolster EU membership dishonours his memory. Another correspondent quoted Dover Beach by Matthew Arnold, saying that the beach at Dover is bare, with only a hint of humanity in a light that "gleams and is gone." He hears the sound of the sea as "the eternal note of sadness." The Greek tragic playwright Sophocles also heard this sound as he stood on the shores of the Aegean. I find this stuff hard to swallow because it's articulated in a very grandiose, theoretical way about how lovely it is that we're all neighbours, that we all share these utopian ideals, and so on. Much of the time, I find these sentiments coming from people who don't care much for Christ our God, such as the metropolitan elite. To hear them from people who read my blog (who are all Christian, of various confessions) is very distressing.

For me, the European Union is the fulfillment of Daniel's Prophecy about the king of the north (see Daniel chapter 11). Who would not then rejoice to see the tentacles of that unhappy, unholy union chopped away! What does the Prophet Isaiah say about Leviathan? The Church of England has failed. The Italian Mission to the Irish has failed. Now, in the 950th year since the flower of Orthodoxy withered, I see great hope that Orthodoxy will rise stronger and greater from the compost heap of the two bastardized confessions that took her place for hundreds of years. I doubt this would have been possible in the European Union, or in the Union that has survived (barely) since 1707. If the price of faith is the destruction of that union, so be it.