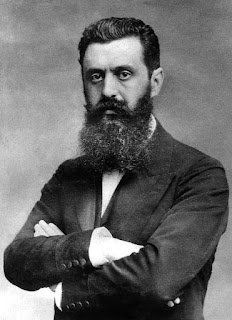 On 26th January 1904 Theodor Herzl, the founder of the modern Zionist movement, had an audience with Pius X in the Vatican to seek his support for the Zionist aim of establishing a Jewish state in Palestine. He recorded his account of the meeting in his diary. The "Lippay" to whom he refers is Count Berthold Dominik Lippay, an Austrian papal portraitist, whom Herzl had met in Venice and who had arranged the audience. You can read the whole account of the audience here. There are some amusing observations. Herzl's description of the pope as "a good, coarse-grained village priest, to whom Christianity has remained a living thing even in the Vatican," is a very fitting one. Even in the Vatican! The awkwardness over etiquette, manifestly Herzl's refusal to kneel and kiss the pope's hand too, leading to the pope's stern response to the tenets of Zionism:


"We cannot give approval to this movement. We cannot prevent the Jews from going to Jerusalem—but we could never sanction it. The soil of Jerusalem, if it was not always sacred, has been sanctified by the life of Jesus Christ. As the head of the Church I cannot tell you anything different. The Jews have not recognized our Lord, therefore we cannot recognize the Jewish people."

Except for "head of the church," this all seems quite reasonable. It went on like this, back and forth between "Rome," represented by Sarto, and "Jerusalem," represented by Herzl, and then broke off. Upon leaving Herzl says that he saw a painting. In his own words:


"In the Raphael stanze [rooms], where I spent the next hour, I saw a picture of an Emperor kneeling to let a seated Pope put the crown on his head. That's the way Rome wants it." 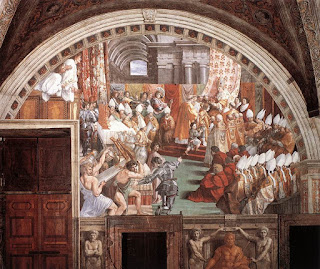 Quite. Pius XII continued to opposed Zionism, associating it, rightly, with Communism (another Jewish ideology), and issued three bland encyclicals on peace in the Holy Land. To his credit, he never recognised the nascent Jewish state, despite Golda Meyerson's (stage name "Meir") cynical appraisal of his war time endeavours to safeguard Rome's Jews with the title "righteous Goy." I wonder if she knew he was actually Jewish? That would certainly explain the liturgical reforms that took place under his supervision. After all, why would Jews care about Christian worship? If you don't believe me, here is a photograph of Pius XII presiding over a Jewish service in a synagogue in the mid-1940's. I discovered it on a website dedicated to exposing that inveterate liar Elie Wiesel. 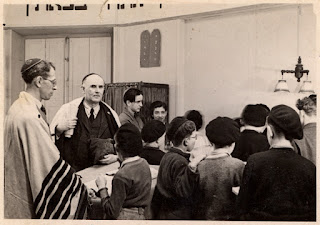 Fast forward to our own time. John Paul II recognised Israel in 1993 and visited the Holy Land defiled by those bearded, Hebrew-speaking Gentiles several times; "prayed" at the fallaciously nicknamed "wailing wall" (never a holy place for Jews before the Balfour Declaration), thereby committing spiritual fornication and countenancing a hoax with the Jews in the land belonging to the Arabs. Those Assisi gatherings did not even come close to this scandal.

And now pope Francis says that to take an anti-Zionist stance is to be an anti-Semite. Well, you can think that if you want, monsignor, but I prefer the Tradition of the Church to your silly rhetoric. I prefer the Church's traditional attitude of hostility to the Jews, collectively culpable for Christ's death (Matthew 27:25) and many gross enormities, to the fundamental reversal in doctrine represented by modern Rome. I prefer Ecclesia in beauty and triumph to Synagoga, faithless and accursed. 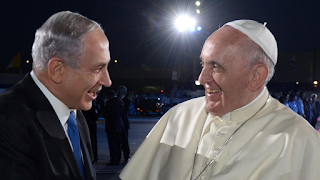 We're all friends now, eh?
Posted by Patrick Sheridan at 4:03 pm
Email ThisBlogThis!Share to TwitterShare to FacebookShare to Pinterest