The Heresy of Ultramontanism, part I... 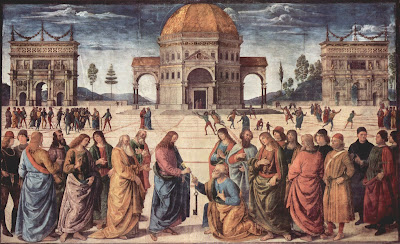 ''There is no doubt, indeed it is known to all ages, that the holy and most blessed Peter, Prince and Chief of the Apostles, column of the faith and foundation of the Catholic Church, received the keys of the kingdom, and that the power of forgiving and retaining sins was given to him, and he till the present time and always lives and judges in his successors...'' (These words were uttered by Philip, a presbyter sent as Apostolic legate of Pope Celestine I with bishops Arcadius and Proiectus to the Ecumenical Council of Ephesus, A.D 431).
In my last post I questioned the legitimacy of ''offering up'' to God the thoughts of a mind made bitter by liturgical abuse and scandal - my supposition being that you cannot offer up to God that which takes away from God. This post, in two (or perhaps three, it is developing as I write)installments (since it is quite long), is an endeavour to clear up any ambiguity readers might have about my disposition on the Papacy.
The Petrine ministry is as old as the Church, older in fact, going back to that time when Our Lord entrusted to St Peter the Keys of the Kingdom, fortified him with the command of strengthening the brethren, of binding and loosing, and of feeding the Sheep. St Peter, alone of the Apostles, is mentioned some 191 times in the New Testament. By comparison, all the other Apostles combined are named about 130 times (although St John the Beloved features prominently among them). The name of Peter is mentioned always first in any list of the Apostles, just as the name of Judas is always mentioned last, and, needless to say, this is a recognisable pattern which has theological (as well as liturgical - you must never isolate Theology from Liturgy, at your peril, for Liturgy is the source of Theology) significance, and the Church, the only legitimate exegete, has articulated this pattern into a coherent and apostolic teaching. These thoughts are not an objection to the Roman teaching about the Petrine ministry, but rather a critique of certain excesses which have crept into the Church over a period of centuries, which I think are detrimental to the liturgical Tradition of the Church.
While I am certainly enamoured of Tradition, I have never understood obstinate appeals to antiquity as the yardstick of all orthodoxy. As J.R.R Tolkien wisely said: ''primitiveness is no guarantee of value'' (he was referring, of course, to liturgical decadence, which he said was as much a problem in the time of St Paul, vis-à-vis his strictures on Eucharistic behaviour, as it was in 1968). One of the greatest tasks of the Church, which is a living church and ought constantly to be engaged with the times, is of passing on the Apostolic Tradition in tact from one generation to the next in order to safeguard the orthodoxy of subsequent generations. This is the fundamental principle and end of Tradition. Just as the Lord is the same yesterday, today and in aeternum, so is the Catholic Tradition - or ought to be (leaving aside questions of ''development'' for the time being). Now, while I do not consider looking at the sources, the rudiments, of the Faith as always a good (not out of fear that the sources do not speak for modern notions of ''papacy'', but rather that there is a danger of a Protestant disposition in looking to the sources, to make my own subjective judgement of these sources the final standard of orthodoxy) it is nevertheless sensible to start from the beginning.
We're all familiar with Matthew 16:18 (And I say to you: That you are Peter; and upon this rock I will build my church, and the gates of hell shall not prevail against it.), the classic ''proof'' of St Peter's primacy; naturally this seems the obvious place to start, but there is an intrinsic danger of undermining the correct exegesis of the Scriptures when taking passages in isolation from the rest of Tradition - indeed, I think it renders comprehension of the Scriptures more difficult. Mainstream Protestant interpretation of this controversial passage tends to separate St Peter's confession from St Peter himself, thereby creating the implausible etymological dichotomy between Petra and Petros, when in reality they are one and the same words. Their's is manifestly a (deliberate, I daresay) misinterpretation of Scripture. Petra (the Greek for ''rock'') and Petros (the same word turned into a masculine proper name) both translate the masculine Aramaic word for rock, namely Kepha, or Cephas in a Greek form. If early commentators often took the reference of Mt 16:18 to be to Peter’s faith, it was simply because the notion that the verse bestows unique authority on Peter and that the Petrine office is continued in the Church uniquely by the Bishop of Rome didn’t occur to them. St Cyprian of Carthage took the verse to refer to the authority possessed in each See by the bishop of that See. If as Catholics we believe that Christ has bestowed unique authority on the Pope, we naturally read this verse in the light of this doctrine, but I don’t think that many theologians today would argue that supreme papal authority can be proved from this verse. I certainly don't think it can. 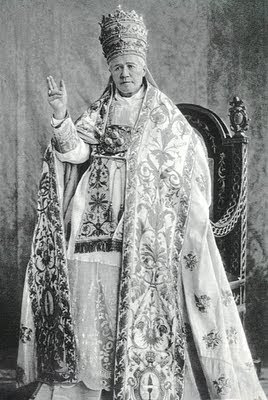 It is a fallacy that all bishops are essentially the same and equal. When the Apostles were all dead, each local church had a fixed hierarchy made up of local bishop, presiding in the place of God, priests (essentially assistants and the ministers of the bishop in the ritus or liturgy), and deacons, who performed the ministry of the Lord in evangelisation, preaching, and the apostolic care of the poor. (Curiously, since the spread of Low Mass, the role of the Deacon has been curtailed in the Latin West, and much of his former prerogatives have been adopted by the Priest, so much so that his role was solely limited to assisting immediately to the Celebrant at High Mass, and even at Mass he did very little. Until the Second Vatican Council, the diaconate was seen as merely a stepping stone to the priesthood - a mentality at stark contrast with the Tradition of the Church, and which contributed to the false notion that the bishop has the ''fulness of sacramental Orders.'' I wonder how many Latin priests see their vocation as a stepping stone to the episcopate? The restoration of the permanent diaconate is one of the many good things accomplished by Vatican II). Later, as the Church became a more established entity within the Roman world, a further organisation arranged the relationship of bishops with each other. By the time of the Council of Nicaea (A.D 325), there was already in existence a complex arrangement of exarchs, metropolitans, suffragans, archbishops etc (at this time, the title patriarch was used merely for more venerable bishops), and it was customary for bishops of the more important towns and cities (such as, obviously, Rome, Alexandria, Antioch, the primacy of these Sees being recognised at Nicaea according to ''ancient custom'') to exercise episcopal jurisdiction beyond the boundaries of their own dioceses. The reason for this (with the exception of the Bishop of Rome, who is a special case) is that the Faith had come first to the more important cities, so naturally, with Missions going out from the more important cities, the Bishop of the city would exercise jurisdiction of the mission territory, and would ordain the new local bishop. By the Council of Chalcedon (A.D 451) there existed a Pentarchy of great Sees (Patriachates): Rome, Constantinople, Alexandria, Antioch and Jerusalem; Constantinople (originally the most insignificant diocese in Asia; it is not even an apostolic see, but the curious rise and ambition of this diocese is beyond the scope of this post) being the least of them.
The unique authority of Rome as the mother and teacher of all the churches was undisputed in the early Church. Already in the 1st century St Clement of Rome (the fourth Pope) sent to the church in Corinth (far away from the diocese of Rome) his Epistle, admonishing the Christians there to receive back their ecclesiastical superiors; and the sending (and reception) of this epistle indicates that he had sufficient Apostolic authority to do so. St Irenaeus of Lyons, writing in the 2nd century, is content to quote against herestics ''the greatest, most ancient and best known Church, founded and constituted by the two most glorious Apostles, Peter and Paul, at Rome,'' because ''every church, that is, the faithful from all parts, most agree with [or ''go to''] this Church on account of her mightier rule, and in her the tradition of the Apostles has always been kept by those who are from all sides'' (convenire ad literally means ''to go with to'', but it can also mean ''agree with'' - both are acceptable readings of this passage). Rome (practically the Bishop thereof) was the final court of appeal (if an Ecumenical Council did not suffice) in ecclesiastical disputes. When a finer point of faith was in question, naturally the churches looked to the first and oldest of the churches, Rome. Sozomen says of the heretic Macedonius: ''When this question was moved, and when the quarrel grew from day to day, the Bishop of the City of Rome having heard of it wrote to the Eastern churches that they must confess the Trinity consubstantial, equal in honour and glory, just as the Western bishops do. When he had done this, all were silent, as the controversy was ended by the decision of the Roman Church, and the decision was seen to be at an end.'' St Augustine of Hippo says in one of his sermons: Roma locuta est, causa finita est. Even St Cyril of Alexandria, the yardstick of orthodoxy at the Council of Chalcedon (even St Leo's Tome, the great Western Christological statement, had to agree with Cyril - this is indicated by the lengthy discussion of the Tome in the fourth session), appealed to the authority Pope Celestine I in his disputes with the heretic Nestorius, because of the ''ancient custom of the Church'' to communicate them with Rome.
So far we have seen the development of a hierarchy of deacons, priests and bishops in the aftermath of the Apostolic age, the development of an elaborate relationship of exarchs to metropolitans and local bishops, the advent of the great Pentarchy, and the unique position of the greatest of all these Sees - Rome. The next post shall go over the development of the Roman Primacy in the West in subsequent centuries, ill-feelings in the East, the Great Schism, and the encroachment of a fundamentally anti-Evangelical and untraditional Ultramontane system and the implications of this godless pseudo-political system for the Church's Liturgy.
Posted by Patrick Sheridan at 2:49 pm
Email ThisBlogThis!Share to TwitterShare to FacebookShare to Pinterest