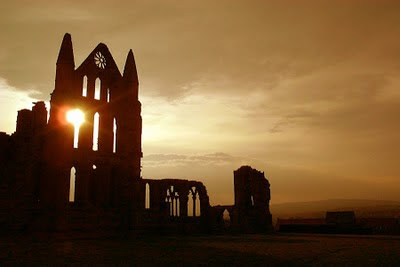 There are so many wonderful stories in St Bede's Ecclesiastical History of the English People, and one of them is the story of the man Cædmon who lived in the monastery of St Hilda of Whitby. Oftentimes at meat he would leave early were the harp or other instruments passed to him, because he had not the gift of song. This changed after a dream he received from God, where he was visited by an Angel, but I may relate the whole story at a later date. I'd like here to consider something interesting from a liturgical perspective.
The night of Cædmon's death, he visited a house where the sick and infirm were accustomed to stay when they were on the point of death. He asked one of the stewards of this house to prepare a place for him, although the man wondered, for he seemed to be in the vigour of youth. The story goes:
Cumque ibidem positi vicissim aliqua gaudente animo una cum eis, qui ibidem antea inerant, loquerentur ac iocarentur, et iam mediae noctis tempus esset transcensum, interrogavit si Eucharistiam intus haberent. Respondebant: ''Quid opus est Eucharistia? Neque enim mori adhuc habes, qui tam hilariter nobiscum velut sospes loqueris.'' Rursus ille: ''Et tamen,'' ait, ''afferte mihi Eucharistiam.'' Qua accepta in manu interrogavit, si omnes placidum erga se animum et sine querela controversiae ac rancoris haberent. Respondebant omnes placidissimam se mentem ad illum et ab omni ira remotam habere, eumque vicissim rogabant placidam erga ipsos mentem habere. Qui confestim respondit: ''Placidam ego mentem, filioli, erga omnes Dei famulos gero.'' Sicque se caelesti muniens Viatico, vitae alterius ingressui paravit...
And when having been put there they were talking and joking in a joyful spirit one with those who had come to this place before them and when the time of midnight had already passed, he asked if they had the Eucharist in the house. They replied: ''What need is there of the Eucharist? For you are not about to die yet, you who speak with us so happily as if you were in good health.'' Again he said: ''Nevertheless bring me the Eucharist.'' When he had taken It into his hand, he asked if they were all charitably disposed towards him and without complaint or of disagreement or rancour. They replied that they all had a most peaceful attitude towards him and without any feelings of anger; and they asked him in turn whether he had a peaceful attitude towards them. He replied without delay: ''My little sons, I have a peaceful attitude towards all the servants of God.'' And thus, fortifying himself with the heavenly Viaticum, he prepared for his entrance into the other life...
St Bede goes on to relate that Cædmon asked how long before the monks sang the Night Offices and that he was content to wait with the monks until then. He died in his sleep, signing himself with the Sign of the Cross (in the traditional way). You will notice that there are some peculiarities here. The most glaring is that he took the Blessed Sacrament into his hands, but there are others too. The Eucharist was reserved in the house, rather than in the monastery church, and was reserved solely for Viaticum. The monks seemed puzzled as to why he wanted the Eucharist, for he seemed not on the point of death. Having received the Eucharist, he asked how long until the Night Offices (Mattins) and he was content to wait until then, and having laid down his head to sleep, he died making the Sign of the Cross.
This is a story from the 7th century. 20th century Catholicism is almost completely in reverse of this, because of the strange principle called the ''development of doctrine'', which I am sure would be as alien to St Bede as it is to any Orthodox Christian today. I am sure he would find the idea that the content of such things as Pastor Aeternus are to be found implicitly in the writings of the Fathers completely risible. By implication of this strange principle, Cædmon and the monks at his deathbed understood the Blessed Sacrament less than modern day Catholics. Pius X advocated frequent Communion, whereas the monks looking after Cædmon were puzzled as to why he wanted the Eucharist (for he was not on the point of death). And it is noteworthy that he was more concerned as to the time of Mattins than prostrating himself in adoration of the Blessed Sacrament, which he promptly ate. How then did Cædmon understand the doctrine of the Real Presence less than modern-day Catholics?
I think that the doctrine of the Real Presence is poorly understood in the Catholic Church, and certainly extra-liturgical Eucharistic adoration has gone off the rails, somewhat. Modern day Catholics might well be concerned (even horrified, if you're of the ''traditionalist'' kind) that Cædmon had the temerity to take the Eucharist into his hands. What if there had dropped particles to the floor? And what was all his concern about the Night Offices about? Surely to have Benediction and to devoutly prostrate oneself before the Eucharistic Lord is more fitting than having sung office?
I think that this notion of the ''development of doctrine'' is a false notion and is just a way of trampling on Tradition. What better way of saying: ''The Fathers were wrong; we are the inheritors. Novelty is better than Tradition because we, the modern-day Catholics, understand things better than they did.''
Posted by Patrick Sheridan at 2:54 pm
Email ThisBlogThis!Share to TwitterShare to FacebookShare to Pinterest