J.R.R Tolkien on the Blessed Sacrament... 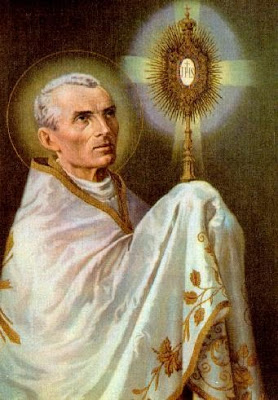 Pange lingua gloriosi Corporis mysterium, Sanguinisque pretiosi, quem in mundi pretium, fructus ventris generosi, Rex effudit Gentium.
Today, in the tradition of the Roman Church, it is the Feast of Corpus Christi, in which we celebrate the institution of the Holy Eucharist. The Feast is relatively modern, going back only 750 years or so (to the time of St. Juliana of Liège) and was first celebrated by the canons of St Martin at Liège. Since at this time local bishops still had authority to order feasts for their own dioceses, the Bishop of Liège, Robert de Thorete, impressed with the ''idea'', called a local Synod in 1246, and the Feast was celebrated the following year. According to the Catholic Encyclopedia, a certain monk called John composed the Office, which is still preserved in Belgium. I'd love to see it. St Thomas Aquinas composed the new Office.

Pope Urban IV, in his bull Transiturus of 8th September 1264, ordered the celebration of the Feast for the Universal Church on the Thursday after Trinity Sunday. It is noteworthy that the Feast is celebrated on Thursday, since this calls to mind Mandy Thursday, although the focus of the Liturgy on that day is upon the Lord's Passion. 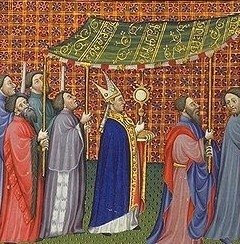 I'd like to wish all Western readers a happy feast. Here are some apposite, and moving, words from J.R.R Tolkien concerning the Blessed Sacrament to his son Michael. He often spoke of the ''silent appeal'' of the Tabernacle:

''Out of the darkness of my life, so much frustrated, I put before you the one great thing to love on earth: the Blessed Sacrament....There you will find romance, glory, honour, fidelity, and the true way of all your loves upon earth, and more than that: Death: by the divine paradox, that which ends life, and demands the surrender of all, and yet by the taste (or foretaste) of which alone can what you seek in your earthly relationships (love, faithfulness, joy) be maintained, or take on that complexion of reality, of eternal endurance, which every man's heart desires.'' (The Letters of J.R.R Tolkien, no.43).
Posted by Patrick Sheridan at 12:16 pm
Email ThisBlogThis!Share to TwitterShare to FacebookShare to Pinterest