Newman and his Collect... 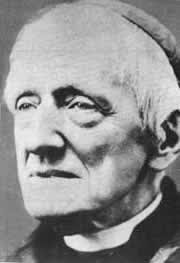 I am currently (having set aside the Ultramontanism post for a while - I'm sure readers have long ceased to expect it anytime soon) working on a funny post - well, it is funny to me anyway, in a controversial sort of way. When it is eventually published, I'll let readers make up their own minds.
I don't usually condescend to comment on things so recent as Newman, but I was interested when I read that his Propers had finally been published. I wonder who composed them? By modern standards they aren't bad, but were probably drafted in English and then translated into Latin by some poor chap. Fr Hunwicke has an interesting post on the Collect (although he beat me to the conclusions about the curious Latinity!). I know Newman chiefly through his Marian work so when I read the Collect, I didn't quite understand what pacem in Ecclesia tua invenire meant, but this sort of thing is curious from a liturgical point. Are Prayers, which are the collective prayers of the Faithful, supposed to express the mind of the Church or the sentiments of the saint?
I tend to think that if Newman were alive today he'd have joined the Orthodox Church, although I am sure that Tolkien would be pleased that he is in the process of canonization. ''Process'' - does there need be such a bureaucratic process? In the early Church, to be made a saint the Bishop would just add your name to the local Litany - this still seems the best way to me. It certainly seems more apposite than a centralized and thorough scrutiny into the minutest points of his life. Saints who are relevant to the Universal Church, and therefore the Kalendar of the Universal Church, are few and established by ancient custom - saints like St Mary, St Peter, St Mary Magdalen, the Fathers and the Apostolic Martyrs etc. Is Newman really relevant to Catholics and Anglicans beyond these Isles? Despite the huge euphoria for his canonization in recent months, I know of one or two Catholics (and prominent literary Anglicans, C.S Lewis for one, who in Letters to Malcolm (do read this monstrous work to get rid of that silly unfounded notion that Lewis was one of the Anglo-Catholics) said that Newman made his blood run cold) who can't stand Newman. I admire his learning first and foremost, but I think I shall stick to old English saints such as Sts Bede and Edward the Confessor...(for those of you who think I am joining the Orthodox Church, this is just to let you know that St Edward the Confessor, who is one of my favourite saints, is not recognised as a saint in that church).
Here is the Collect: (Notice that I have excised the macrons, no doubt included for the benefit of non Latinists).
Deus qui beatum Ioannem Henricum presbyterum lumen benignum tuum sequentem pacem in Ecclesia tua invenire contulisti concede propitius ut eius intercessione et exemplo ex umbris et imaginibus in plenitudinem veritatis tuae perducamur. Per Dominum.
The first part is a bit of a mouthful I think, plus I don't quite understand why the translation given on the Propers webpage features the word ''grace'' - where is this in the original? The verb confero, contuli, collatum (which has a variety of meanings, but here means confer or bestow - in translation it is always good to distance yourself from overly explicit Latinisms - for example, I avoid using such terms as laudable, and use praiseworthy instead, I use foreword instead of preface, etc.) seems to agree with the accusative participle sequentem, but translated literally into English it doesn't make sense. Here is my own translation (I wonder if I have lost something from the original):
O God, who bestowed upon blessed John Henry the priest [the grace] following your kind [benigne is the adverb rather than the adjective benignus] light to find peace in your Church, grant mercifully that by his intercession and example we may be led out of the shadows and images unto the fullness of your truth. Through the Lord.
Not bad as far as a modern composition is concerned. But who am I, so rustic and untutored, to comment?
Posted by Patrick Sheridan at 1:26 pm
Email ThisBlogThis!Share to TwitterShare to FacebookShare to Pinterest