A story of conversion... 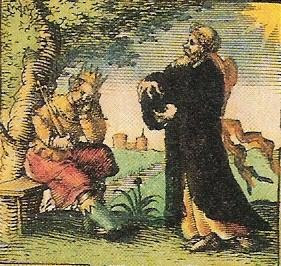 As you all know, I am very fond of St Bede. His Ecclesiastical History is full of conversion stories, miracles, apparitions etc, and is often very interesting from a liturgical point of view. I may relate the story of Caedmon in a future post with this in mind, but I wish here to share my appreciation of this wonderful story about the conversion of Edwin, King of the Northumbrians. It is true that the principle cuius regio, eius religio reigned at the time, but it is a lie that the Christian missionaries to this Isle came bearing swords and slew the heathen men who clung still to their old gods. The bishop Paulinus came to the king, expounded the Word of God, and let the king make up his own mind. ''First you have escaped with God's help from the hands of the enemies you feared'' said Paulinus. ''Secondly you have acquired by His gift the kingdom you desired; now, in the third place, remember your own promise; do not delay in fulfilling it but receive the faith and keep the commandments of Him who rescued you from your earthly foes and raised you to the honour of an earthly kingdom. If from henceforth you are willing to follow His will which is made known to you through me, He will also rescue you from the everlasting torments of the wicked and make you a partaker with Him of His eternal kingdom in heaven.''
And so the king summoned a council of the chief priests and eorls of his realm. The story goes:
Cuius suasioni verbisque prudentibus alius optimatum regis tribuens assensum, continuo subdidit: ‘Talis,’ inquiens, ‘mihi videtur, rex, vita hominum praesens in terris, ad conparationem eius, quod nobis incertum est. Temporis, quale cum te residente ad cenam cum ducibus ac ministris tuis tempore brumali, accenso quidem foco in medio, et calido effecto caenaculo, furentibus autem foris per omnia turbinibus hiemalium pluviarum vel nivium, adveniens unus passeium domum citissime pervolaverit; qui cum per unum ostium ingrediens, mox per aliud exierit. Ipso quidem tempore, quo intus est, hiemis tempestate non tangitur, sed tamen parvissimo spatio serenitatis ad momentum excurso, mox de hieme in hiemem regrediens, tuis oculis elabitur. Ita haec vita hominum ad modicum apparet; quid autem sequatur, quidue praecesserit, prorsus ignoramus. Unde si haec nova doctrina certius aliquid attulit, merito esse sequenda videtur.’ His similia et ceteri maiores natu ac regis consiliarii divinitus admoniti prosequebantur.
My translation:
Another of the king's chief men, offering counsel with his recommendation and with prudent words added immediately: ''Such,'' he said, ''seems to me, O King, [to be] the present life of men on earth, in comparison to that time which is unknown to us. It is like when you are sitting at meat with your ealdormen and thegns in wintertide, with the hearth burning in the middle and the dining room [caenaculo] has been made warm, but outside the storms of wintry rain or snow are raging through all, and a sparrow flies quickly through the hall, who when entering through one door, soon goes out through another. At that time, when it is inside, it is not touched by the storm of winter, but however when a very small space of calm has run out in a moment, soon returning from winter unto winter, it escapes from your eyes. So this life of men appears moderately [modicum, restrained, moderate]; but what follows, or what goes before, we know not at all. Consequently, if this new doctrine brings us more certainty, it seems worthy to be followed.'' Other elders and counsellors of the king continued after the same manner, being divinely prompted to do so.
Merito esse sequanda videtur - it seems worthy to be followed. Rest assured that St Paulinus brought not with him Low Mass or Benediction, or Rosary at a side Altar...
Posted by Patrick Sheridan at 2:04 pm
Email ThisBlogThis!Share to TwitterShare to FacebookShare to Pinterest