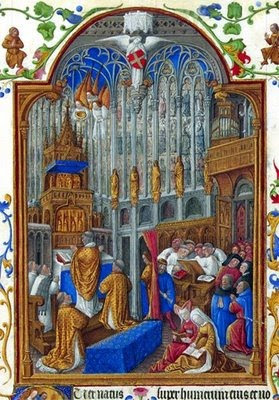 During Sunday Mass (in green rather than white vestments - you can blame wonderful Pius X for that - see Abhinc duos annos) I was looking around the congregation as the choir sang Credo III and thought: ''None of you have any idea what you're singing,'' and the thought came to me that while the term ''vernacular'' is almost entirely meaningless, why do people who can't even read Latin prefer Latin as a liturgical language? Liturgy is a profound mystery of the Faith, and yet does ''mystery'' necessarily entail collective ignorance of the Ritus? I am thinking of the Orthodox church - where they have achieved a most perfect balance, something inconceivable in the West - the Liturgy there is at once mysterious (and beautiful) and comprehensible, because they have always been careful to utilise the vernacular of the local area (even if, in the case of the Russians and the Greeks, this is a more ancient and courteous form of language, rather like Cranmerian English today), there is real ''active participation'' with the litanies (only two Masses in the Roman Rite now begin with a Litany, those of the Vigils of Easter and Pentecost, whereas anciently all penitential Masses began with a Litany, which replaced the hymn).
In the West there really is no such thing as ''active participation'' of the Faithful. The congregation are sat in their pews (pews themselves being antiliturgical and cluttering up a liturgical space), counting beads or trying to follow the variable parts of the Liturgy with layman's missals etc, and then upon the great Dominus Vobiscum answering Et cum spiritu tuo - this just about sums up how much real ''participation'' there is in the Roman Rite. There have been various attempts to alleviate this over the centuries, and Vatican II was an attempt to make the Liturgy more traditional (even if it got just about everything wrong), but these have all been haphazard and ill-thought out (such as having the sacred pericopes of the Epistle and Gospel read before the Sermon - why bother when the proclamation of these are as much for the instruction of the circumstantibus (notice that this means ''those standing by'') as an act of worship? You might as well translate the whole Liturgy for the congregation before the Sermon if ''understanding'' at an intellectual level is what you're attempting by doing this). Similarly the idea of a layman's missal, with the variable parts of the Liturgy laid out plainly in Latin and English, negates the idea of having Latin in the first place.
What am I saying then? Latin Liturgy for the Latinists? English Liturgy for those who have not the hard tongue of the Romans? As a Latinist myself I am biased, and I would never abandon Latin (I like Latin as much for its ancientry as for its inherent beauty), moreover my own experience of vernacular Liturgy in a Western context has been incomparably bad. I don't know - maybe one day I shall undertake the hard task of translating the Divine Liturgy of St John Chrysostom into Latin and abandoning the old Roman Rite altogether. In the days of the Fathers, the Roman Rite and the various Eastern liturgies may have shared a common ethos, an expression of the same Faith, but now they are almost entirely at variance, the one expressing scholastic ideas and ''merits'', and the other more expressive of the ancestral faith.
I don't think that the Roman Rite is irretrievably lost (I would have nothing to do with it if I did) but it will take a lot to ''sort it out'' as it were. What do my readers think?
Posted by Patrick Sheridan at 3:03 pm
Email ThisBlogThis!Share to TwitterShare to FacebookShare to Pinterest