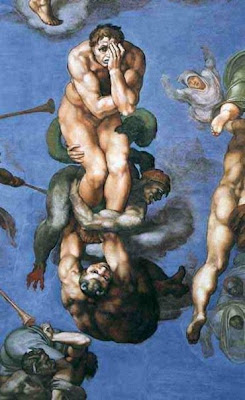 In my days as a Catholic Traditionalist, I used to (like my fellow traddies) look down my nose at schismatics, tambourine-waving yokels, High Church Anglicans, even the Orthodox, because I considered the Catholic Church, with her monarch-bishop in Rome, completely aliturgical episcopate (not to mention the countless secular clergy, Religious and laity - more fond of pious devotions such as the Rosary than real liturgy), Sacred Congregation of Rites (or whatever it's called nowadays - a nasty wretched little oligarchy created so that some pen-pushing cleric in Rome could have a job), her lovely 1962 liturgy and subsequent liturgical reforms, promulgated through Papal authority, and a tradition generally mudded by ''development'' etc, to be the True Church. The Roman claim to be so aside for a moment, I'd like to consider the question as to why, if we are privy to liturgical abuse and scandal, we are supposed to ''offer it up.''
The idea of ''offering it up'' (whatever ''it'' is) in a liturgical context is a fond fancy and seems to me to be a pretentious way of maintaining one's loyalty to the Apostolic See whilst putting oneself through obviously defective (even heretical - I would consider the abomination of the Folk Mass to be heretical, and partakers in such ''liturgy'' as heretics) liturgy because of one's ''obligation'' to do so. I would be interested if a reader provided me with evidence from the vitae sanctorum, the Scriptures or the Fathers of the Church of Christians ever having to tolerate heresy in worship, scandal and abuse as the litmus test of one's loyalty to Rome. ''Offering up'' one's feelings of profound bitterness at liturgical abuse can only be directed as a choking smoke in the sight of God's Altar in Heaven. It makes absolutely no sense to me to attend a '62 Rite liturgy (and some traddies, the SSPX for instance, actually think they're superior and safely above the tambourine-waving yokels you'll find in most Catholic churches because of this - to me they're in the same boat - both damnable heretics, both with an unreasonable contempt of Tradition) or a New Rite Mass with a postcommunion dance or whatever and to say to oneself: ''I know what is going on here is a blasphemous farce - I know, I'll offer it up, because by putting myself through this nonsense, I'm gaining brownie points with the Lord!'' Still, the wicked shall be turned into hell (Psalm 9:17). But why bother putting yourself through it in the first place?
And then there's me. Because I love Tradition and hate novelty I would rather attend an Old Rite High Mass in an Anglo-Catholic or Western Rite Orthodox church than a '62 Rite Mass (or even more monstrous, the spectacle of a '62 Rite feast following pre-'62 rubrics) in a Catholic church, however reverently it is offered. As regards Anglo-Catholics, I just got silly ideas of ''validity'' out of my head. Apostolicae Curae is a century out of date, and doesn't account for various developments, both within the Anglican church and the Roman Church, in the last century. The constitution also does not account for the modern manner of conferring Orders in the Roman Rite. Indeed, I wonder sometimes that the Roman Church has not abandoned its hauteur and separatism in this regard since we have an embarrassing century of liturgical deform to account for. Anglicans may have women ''priests'' and ''bishops'', but the Catholic Church has an equally spurious ''liturgy'' - Novus Ordo and its older cousin the '62 Rite. At least with the Anglo-Catholics the reverent externals of traditional Liturgy are present - and I daresay, sometimes God must fain send down the Holy Ghost upon the Altars of those in schism with Rome who do Liturgy properly, but must withhold the Sacraments from those Catholic-heretics (the aliturgical folk, the damnable heretics, the very brood of vipers) who make a mockery of Liturgy.
So to come back to the question of ''offering it up'' - why bother when you can attend traditional Liturgy beyond the confines of Rome?
Posted by Patrick Sheridan at 3:16 pm
Email ThisBlogThis!Share to TwitterShare to FacebookShare to Pinterest