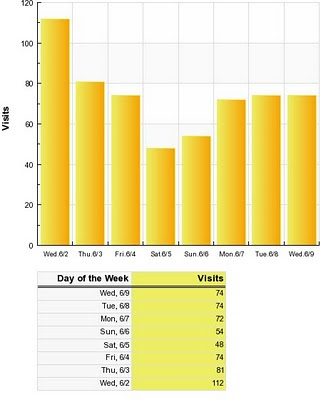 My new blog has now had well over 1,000 hits, and it's only over two weeks old. As you can see my ''average'' now (although it fluctuates a bit - the ''dip'' over the weekend was when I didn't post anything) is about 75 hits a day, which is more or less where I left off with Singulare Ingenium. Interestingly I get more Orthodox and High Church Anglican readers than Catholic ones - someone said the other day that this ought to be cause for concern, but I don't think so necessarily. The Orthodox have more liturgical sense generally than most Catholics, and I consider most Catholics to be heretics, in a state of de facto schism with their own liturgical tradition (the logical consequence of Papal interference in Liturgy and such ''traditionalist'' organisations as the Latin Mass Society, who deliberately pull the wool over the eyes of sincere faithful who long for Tradition - expecting Miranda and they're greeted by Caliban more often than not) anyway.

Do take the time to congratulate Fr Hunwicke on the anniversary of his priestly ordination.
Posted by Patrick Sheridan at 11:59 am
Email ThisBlogThis!Share to TwitterShare to FacebookShare to Pinterest