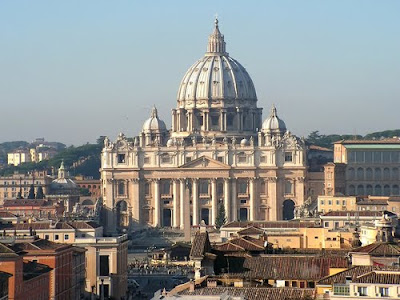 Some friends from my parish church are going to cycle to Rome next month via an ancient route from Canterbury called the Via Romea. I encourage you to take a look at their blog for more details.
I have never been to Rome, but I have always wanted to go. My mother and I had planned on going for my 21st birthday but lack of funds dashed that idea. Years ago I wanted to go to Papal High Mass each day in each of the stational churches in Rome during Lent, but since no such splendour exists anymore I think nowadays I'd rather visit Rome to aid my classical education more than anything else (the 18th century Grand Tourist was often profoundly disappointed with Catholic Rome)...
Posted by Patrick Sheridan at 1:36 pm
Email ThisBlogThis!Share to TwitterShare to FacebookShare to Pinterest