The Baptism of the Lord... 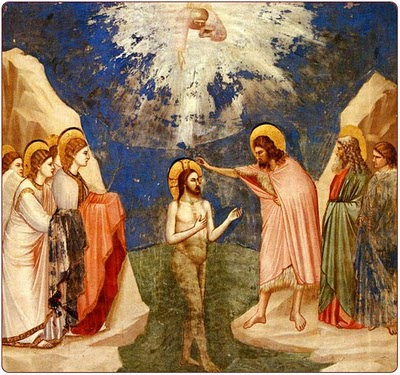 Yesterday I was at St Magnus the Martyr for the feast of the Baptism of the Lord. It was a High Mass, of course, with lay Subdeacon (naturally), tunicled Crucifer, and another tunicled server bearing an Icon of the Baptism - overall very impressive. After Mass we went to London Bridge to bless the River Thames, where we were met by the congregation of Southwark Cathedral (not the pretend Southwark Cathedral dedicated to St George). Going quite regularly to St Magnus I sometimes forget about the general apostasy of the Church of England, and the party from Southwark consisted of a Deaconess in cope (who read the Gospel), and various servers in cassock-albs, one of whom looked like a randy old lesbian. Still, little different from the kind of pseudo-Liturgy the Roman Church is wont to provide, where the basic rhythm of Benediction or Low Mass is uninterrupted. It would have been even more impressive to have witnessed the traditional Roman form for the blessing of waters on the Eve of the Epiphany (not, of course, the mutilated version approved by the S.R.C in 1890).
Afterwards we went to Southwark Cathedral for refreshments, where it was good to catch up with friends. The Deaconess kept her distance; I wonder if she noticed the sidelong looks I was giving her? I suggested to someone that I might collect information about J.R.R Tolkien's involvement in the early Traditionalist movement, and anything in his unpublished letters pertaining to the upheavals in traditional Liturgy in the '50s and '60s. They said that it would be interesting, but then proposed that I write something on Liturgy in St Bede's time. Western Rite Orthodoxy then came up, and I expressed my sympathy with the movement. An Orthodox friend told me of his reservations with the movement, which I fully understand; ''Western'' Liturgy having developed outside of Orthodoxy in the last 1,000 years. I must say that the people who provide ''Western Rite'' liturgy in the Orthodox Church seldom know anything about Liturgy, and do such disservices to the Roman Rite as artificially inserting an Epiklesis into the Canon. Putting Liturgy upon an operating table and cutting out bits which are less ''orthodox'' than others is a method of artificial creative liturgy fraught with peril. If I were in charge of a Western Rite Orthodox parish I would provide Sarum Use Liturgy, in Latin, following the Julian Kalendar, with a ''universal'' Sanctorale more or less consonant with the kalendar in use in the Roman Church around the 12th century (but also incorporating various Catholic and Orthodox saints canonized afterwards), and a ''local'' kalendar consonant with the local kalendar of the diocese, and probably the only serious correction I would make to the rite of Mass is the removal of the Great Elevation after the Consecration.
Discussing Liturgy is great, but methinks that there is a pre-requisite for Romans that they know absolutely nothing about it. The most stimulating conversations about Liturgy I have ever had have always been with Orthodox and Anglo-Catholics.
Posted by Patrick Sheridan at 1:40 pm
Email ThisBlogThis!Share to TwitterShare to FacebookShare to Pinterest