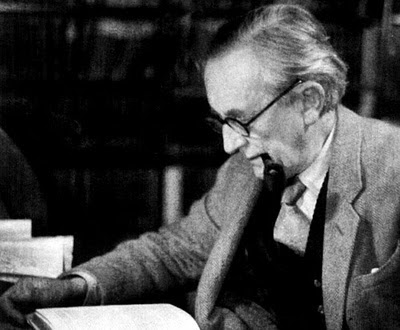 In his essay On Translating Beowulf, J.R.R Tolkien said:
''If you wish to translate, not re-write, Beowulf, your language must be literary and traditional: not because it is now a long while since the poem was made, or because it speaks of things that have since become ancient; but because the diction of Beowulf was poetic, archaic, artificial (if you will), in the day that the poem was made. Many words used by the ancient English poets had, even in the eighth century, already passed out of colloquial use for anything from a lifetime to hundreds of years...''ergo...''you will misrepresent the first and most salient characteristic of the style and flavour of the author, if in translating Beowulf, you deliberately eschew the traditional literary and poetic diction which we now possess in favour of the current and trivial.'' (J.R.R Tolkien, The Monsters and the Critics, and Other Essays, pp.54-55).

Tolkien's principles of translating Beowulf could be aptly applied to the principles of translating liturgical texts. The Latin of the Roman Rite was never a barbarous tongue understanded of the people in the Protestant sense, making use of everyday colloquialisms, with an air of familiar informality. Rather the Latin was of a more archaic, courteous style, and richer in beautiful words (comparable with, say, Túrin Turambar's first meeting with the outlaws after his flight from Doriath. The outlaws thought him an Elf because of his manner of speech and bearing), as befits the Sacred Liturgy. Evidence enough for this is the style of the Roman Canon and the Collects, neither a purely classical Latin, nor an expression of vulgarism; such words as quaesumus (''we beseech''), used in most Collects, were considered obsolete even by Cicero. Their inclusion in the language of Liturgy, which is the principle means by which we know God, is noteworthy, and dashes the Modernist belief that Liturgy in the early Church pertained to the nature of Pentecostalist tongue-wagging, or holding hands around a bowl of water filled with tea lights; incense sticks and whale music. No, the ancestral language of Liturgy in the West was lofty and non-vernacular.
Therefore, following Tolkien's principle, the English translation of the Latin original should reflect and contain the style and sentiment of the Latin, but in a way which is equally expressive of the loftiness of ''liturgical language.'' It should be utterly faithful to the sense, spirit and cadence of the Scriptural and Patristic texts of the Liturgy, but not so literal as to render these texts bald and artificial. How can you faithfully convey the sense of Liturgy, after a manner consonant with the original composers of the texts, such as St Leo the Great (whose demonstrable mastery of the Latin language was astonishing), intelligibly in English if you have so distanced yourself from its inherent loftiness of expression? The new ICEL translation of the Roman Canon, at least the draft version (the only one I have seen I'm afraid - you can view the text on this man's blog), is at best a verbose, overly literal rendering of the original; at worst clearly betrays the very principles of translation (in such a way as to make Old ICEL seem desirable! At least old ICEL is succinct - like Latin!). Is this incidental or endemic of the general incompetence of modern Rome in absolutely everything? In the last five years we have seen efforts on the part of Rome to cultivate the Sacred Liturgy, but what do we get? First, to cover up a demonstrable liturgical abuse, the Pope says that using six candles and a crucifix (itself very modern, and traceable to the bad taste of Baroque liturgy!) makes this void. Effectively he has conjured out of thin air a pseudo-theology of liturgical orientation at stark contrast with the ancestral attitude of Christian liturgical prayer, which is compass Eastward. Next we have Summorum Pontificum, which I have discussed before. And now this long-awaited translation! I have no doubts at all that Pope Benedict's desire is for the good of the Church, but either he is badly advised or he needs to stop imposing his own theologies of Liturgy on the Church. This new translation is going to make something very beautiful in the liturgical patrimony of the Roman Church a hideous travesty, in a way which candles and crucifixes won't. 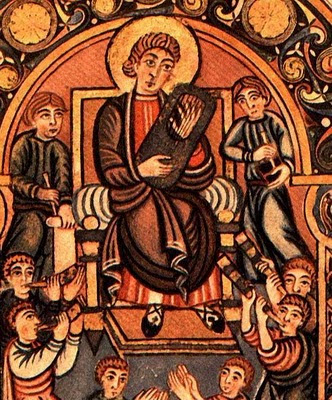 King David composes the Psalms, from an Old English Psalter, circa A.D 750.

Which sounds fairer?
The heavens declare the glory of God: and the firmament proclaimeth the works of his hands. Day unto day uttereth speech: and night unto night sheweth knowledge. (Ps 18:1-2, Douay-Rheims version).
Or:
The heavens declare the glory of God, the vault of heaven proclaims his handiwork, day discourses of it to day, night to night hands on the knowledge. (Ps 19:1-2, New Jerusalem version)
This is nothing to do with Old or New ICEL, but is simply to demonstrate the very different sense that these two translations of the same Psalm verse convey. On the one hand you have a Psalm-verse worthy of liturgical expression, and the other a rather boring modern version which is unedifying. God help Catholic school children provided with such a translation, to the ruin of their taste and impetus to improve their limited vocabularies!
If Old ICEL made the modern Roman liturgy seem less sacred and more ''familiar'' than the legitimate desire to translate the ancient Roman Liturgy into Cranmerian English would have done, then New ICEL, verbose and literal, is an assault on the Roman Liturgy in a more serious way. Yes the literal sense of the text is conveyed, but has Rome not rather traded a faithful translation for a literal one, and at great cost?
Posted by Patrick Sheridan at 12:14 pm
Email ThisBlogThis!Share to TwitterShare to FacebookShare to Pinterest