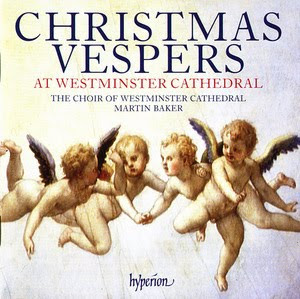 ...Rex pacificus, super omnes reges universae terrae!
I am presently listening to Christmas Vespers from Westminster Cathedral, a CD I would heartily recommend. It could quite aptly be called ''Tridentine'' Vespers, since the Office hymn is Christe Redemptor omnium, which Urban VIII ''improved'' in 1629. [Update: A reader more learned than I in matters liturgical has pointed out that other than the traditional Office hymn, the presence of the Short Responsary and subsequent Kyrie and Pater indicate that the Vespers sung/performed here pertains more to the nature of pre-Tridentine Monastic use, and probably gives a taste of what Liturgy at Westminster Abbey was like once upon a time - all the more reason to go out and buy it I'd say!] When I first bought the CD, I thought that the inclusion of the traditional hymn was because the choir had sang the hymn to a setting by a pre-Urban VIII composer - not the case! The composer is in fact only 12 years older than me. Comparing the two hymns makes interesting reading - the Urban VIII version is a completely new composition! In fact a task I have set myself for this month is to translate the two hymns literally into English. It seems quite clear that the ethos and symbolism of the old Office hymn was lost when the Pope decided that it wasn't good enough, and invented his new improved version. Rather like when Pius XII changed the propers for the feast of St Mary's Assumption (propers used by so-called ''traditionalist'' groups I might add - clearly in deference to Tradition. The irony...).
I invoke for you all the graces from the child Jesus in this most dear solemnity of His Birth. Gloria in excelsis Deo et in terra pax hominibus bonae voluntatis!
Posted by Patrick Sheridan at 8:17 pm
Email ThisBlogThis!Share to TwitterShare to FacebookShare to Pinterest