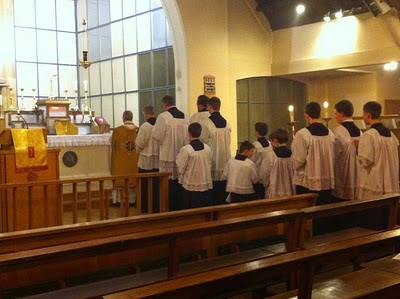 Decadence, tastelessness...I honestly don't know how to describe this exactly. Their attempt at Liturgy seems at best a revival of 1950s Catholicism, a ''let's pick up where Pius XII left off''' kind of approach, with the abundance of lace, children, the ''big six'', grotesque Roman style vestments (the Chasuble here, up close, looks like sandpaper), and wooden mock-gradines, as if the Altar itself isn't good enough (and don't let us forget such incidents as Joe the Communist and Signum Magnum - both innovations from the 1950s). You would have thought that at a solemn feast such as the Nativity there'd have been more of an effort with the ceremonial, and ''colour'' (i.e, tunicled Acolytes perhaps, Crucifer etc; there was a Deacon but because Fr So-and-so the Priest didn't turn up, he was relegated to the choir, along with potential Subdeacon), but in Traddieland the only thing to distinguish a feast from a day of simple rite is the extra lace. How unedifying it truly was. Indeed, to put it one way, this photo looks less like real Liturgy as a theatrical performance (as I said before, children's Nativity play)! 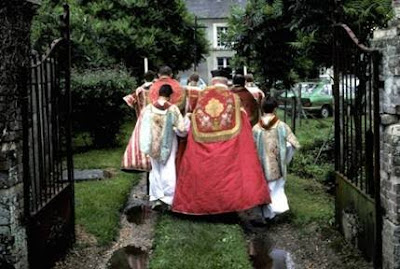 Now this photo by contrast is quite pleasing. Note the tunicled assistants to the Celebrant in cope, pluvialistae (possibly rectores chori, if so most likely laymen), etc. This seems more in keeping with the ''noble simplicity'' of the Roman Rite to me than the inordinate use of lace ornamentation, and a million kids in cottas.
Posted by Patrick Sheridan at 1:13 pm
Email ThisBlogThis!Share to TwitterShare to FacebookShare to Pinterest