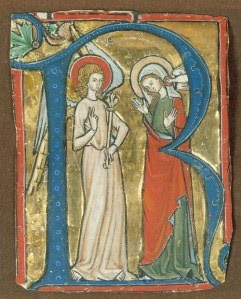 Please note that while Blogger may reckon the dates according to the New Kalendar, I don't, so to me it is the Fourth Sunday of Advent today (with a beautiful Missa Rorate Caeli), and the New Year doesn't start until 25th March, which as Tolkien said was the actual date of Our Lord's Crucifixion (and the beginning of the New Year in Gondor), as is tradition in the Church. Unfortunately so far-reaching is the worship of Mammon encroached upon our lives, even as Catholics in communion with the Apostolic See, that we oft witness the spectacle of so-called traditional people heralding the coming of New Year during Advent - along with all manner of secular people, to whom pious religion is ridiculous.
To supplement (and improve I must say!) my thoughts the other day on the Subdiaconate and the general pretence of Trad Catholics, I received an email from a certain Han, who comments sporadically on this blog, who said:
''I agree that if there can be lay acolytes, there seems to be no reason why a layman cannot fill in as a subdeacon. Whatever some may have speculated in the past it seems clear to me that the Roman Catholic Church does not consider the subdeaconate to be a major order. At the very least, the fact the Pope Paul VI abolished it along with the rest of the minor orders must mean that it could never have truly been a major order, since the distinction seems to drawn at the level of sacrament. Either ordination to the subdeaconate is not a sacrmant and therefore was never a major order, or Pope Paul VI abolished a sacrament which means that the Roman Catholic Church is not the True Church. Being Orthodox, I naturally do not think that the Roman Catholic Church is The True Church, but nevertheless, for your (non-Sedevacantist) Catholic contributors putting forth the theory that you are a perfidious heretic for thinking that a layman may serve as subdeacon, it might be worth considering.

''More significant, in my mind, is the fact that subdeacons were never "ordained" by the laying on of hands by the bishop. The Canon Law approach that some have suggested is flawed. The subdeaconate dates back to at least the 4th Century, whereas the very idea of Canon Law dates only to about the 11th, and the Code of Canon Law only to the 20th. We know for a fact that there were married priests in the West as late as the 11th Century and it is likely that the notion of having an "obligation" to pray the Office dates only to Trent. Therefore, mandatory celibacy and Breviary-reciting duties cannot be the test of whether any particular order is a major or minor one. As an aside, I will note that if these two criteria were determinative, monastic tonsure should have been recognised as a sacrament in the West (as it was in some places in the East). Anyway, the laying on of hands by the bishop seems to me to be was separates the Latin major orders from the minor ones. If it is accepted that the deaconate, the presbyterate and the episcopate are indubitably major orders, then we should look to longstanding liturgical practice to determine if the subdeaconate is also a major order. Because the rite for making a subdeacon is like that of the minor orders rather than that of the major ones, it seems clear that the subdeaconate is a minor order.

''That it has been treated as a major order is curious in the extreme. Why should it have been so? Someone commented that it was the close connexion between the ministry of the subdeacon and the altar. If this is the case, then there should be no lay acolytes. If proximity to the Holy Table requires one to be in major orders, the only principled place to draw the line, it seems to me, would be the rail. Certainly, there is some historical evidence of this. I remember the story of the Emperor attending liturgy in the West during a visit wherein he was kicked out of the sanctuary because such area was reserved to the priests. If one can tolerate non-clerics to be inside the rail doing stuff at Liturgy, then there is no reason why the ministry of this particular minor order need be performed by a priest.

''Actually, there is no good reason why priests should be acting as deacons or subdeacons at all. Such practice seems to deny that there are actually any major orders, plural, in the Roman Catholic Church. Based upon the practice of the Roman Catholics, it seems to me that they have (or had until Vatican II revived the deaconate) only two orders: the Pope and Priests. Deacons are simply defective priests with no real ministry of their own, and bishops are merely mitred archpriests with jurisdiction. Priests derive their authority not from the bishop (as evident in their "right" to celebrate their own private Mass every day), so it is not as if bishops have the ministry of being "overseers." Yet, at the same time, they act as middle managers of Rome, so it is not as if they are successors to the Apostles.

''For my part, I think that part of the reason why this issue arose for you is that the current lens through which Latin theology looks at ordination is the lens of ontological status rather than ministry. Take again the example of the priest's "right" to celebrate his own Mass every day--a "right" that priests who have no ministry seem to nevertheless have (most monks, for example). I think it is far better to think of priesthood as a ministry. Since the bishop is the head of his Church, all ministry is delegated ministry of the bishop, and priests are ordained as needed for Eucharistic ministry. Furthermore, in the Orthodox Church, no priest has the "right" to celebrate Divine Liturgy by virtue of being a priest; rather, he must have been given an Antimension by the bishop for that purpose. Were we to look at your situation through this lens, the answer would be clear. Is there a need for a subdeacon? If so, is this particular ministry necessarily derived from the ministry of the bishop (such as the priesthood), or is it a separate ministry of the Church (such as prophet, teacher or evangelist). If it is within the category of the former, then a layperson cannot fill in as the need arises, but rather the bishop must ordain one to that ministry. If it is within the latter category, then a layman can fill in, but if this becomes a common occurrence, such person should be tonsured to be the "ordinary minister" of such ministry rather than create a situation in which a parish has regular minister without any relationship to the bishop.'' 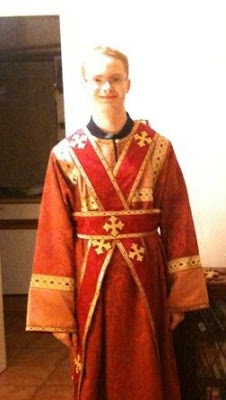 This is me vested as an Orthodox Subdeacon.

I agree with everything you say, especially about the laying on of hands - something integral to the threefold Sacrament of Major Orders. I have myself written about the Subdiaconate before. New readers of this blog might like to read the posts I wrote here and here, for instance.
Posted by Patrick Sheridan at 12:26 pm
Email ThisBlogThis!Share to TwitterShare to FacebookShare to Pinterest