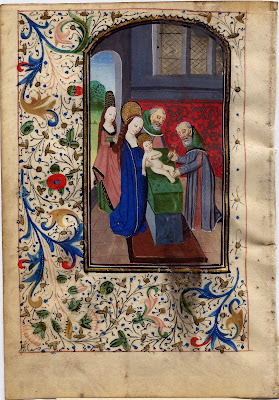 Et postquam consummati sunt dies octo, ut circumcideretur puer, vocatum est nomen eius Iesus, quod vocatum est ab angelo priusquam in utero conciperetur. (Luke 2:24).
Today is the feast of the Circumcision of the Lord, and the Octave Day of Christmas. It is one of those feasts in the liturgical Kalendar where the reality of Christ's twofold consubstantiality is emphasised. On Christmas Day you have the picture of the frail Infant, drawing a veil over the immensity of His Majesty (as St Leo wrote in the Tome). On the eighth day you compelled to understand that Christ became so truly human that not only did He depend upon His blessed mother's milk, but that He condescended to undergo the decrees of the Law.
As you know I am very fond of St Bede the Venerable, whose Homilies and Scriptural exegeses oftentimes surpass even St Augustine's for coherence and eloquence of expression. What shall we say of this Circumcision, this first shedding of the Infant Christ's precious blood? St Bede wrote a wonderful Homily for today's feast, In die festo circumcisionis domini, which you will find in G.A Giles' collection of 1843 (I don't own this huge work, but would love to). St Bede, following St Augustine of course, interprets the mystery of the Lord's Circumcision as a type of His Passion according to the flesh and a lattice window, as it were, through which we can glimpse at His glorious Resurrection, and by extension, the general resurrection of all in Christ. ''You ought to know,'' he says, "that Circumcision under the Law wrought the same healing against the wound of Original Sin as does the Baptism in this time of revealed Grace, except that under Circumcision they were not able to enter the gate of the heavenly kingdom.'' I will not belabour the obvious parallel between Innocent III's exposition several centuries later, but St Bede went on to conclude that the mystery of the Circumcision of Christ was integral to the mystery of the Incarnation itself. Since Man must be redeemed after a manner consonant with his nature, it was necessary for Christ, as a true Son of Abraham, our father in faith, to undergo Circumcision out of righteous obedience to the Law.
Christ ''submitted to Circumcision as decreed by the Law. He who was without any stain of pollution did not reject the remedy by which the flesh of sin is made clean.'' Christ was obedient to the Law, as our divine Legifer, ''that He might commend to us the necessary virtue of obedience by an outstanding example. Just as He submitted Himself to the waters of Baptism, by which He wished the people to be washed clean of the stain of sin, undergoing it Himself, not from necessity, but to set an example. Purification, both by the Law and by the Gospel, which He needed not, the Lord did not despise and did not hesitate to undergo.'' In the mystery of the Circumcision, and of the Lord's Baptism, the mystery of the Incarnation is made whole, and the gulf sundering the Law and the Gospel is bridged, for Christ Himself willed it. Ultimately we are, by putting on Christ, ''circumcised,'' as it were, from all stain of mortality. Circumcision, says holy Bede, is an eschatological type of that veritable cleansing of our hearts, where we look forward to our true and complete circumcision, when, on the Day of Judgement, all souls having put off the corruption of the flesh will enter the forecourt of the heavenly kingdom to behold forever in blessedness the beautiful countenance of the Creator.
Posted by Patrick Sheridan at 11:39 am
Email ThisBlogThis!Share to TwitterShare to FacebookShare to Pinterest