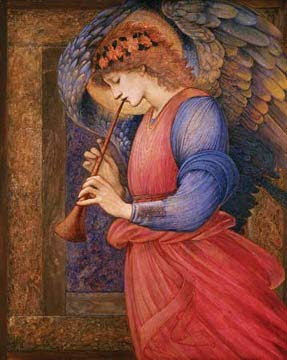 Alleluia, Alleluia. Crastina die delebitur iniquitas terrae, et regnabit super nos Salvator mundi. Alleluia.
In a strange way Christmas Eve reminds me of this passage in The Silmarillion.
''Now as has been told the power of Elwë and Melian increased in Middle-earth, and all the Elves of Beleriand, from the mariners of Círdan to the wandering hunters of the Blue Mountains beyond the River Gelion, owned Elwë as their lord; Elu Thingol he was called, King Greymantle, in the tongue of his people. They are called the Sindar, the Grey elves of starlit Beleriand; and although they were Moriquendi, under the lordship of Thingol and the teaching of Melian they became the fairest and the most wise and skilful of all the Elves of Middle-earth. And at the end of the first age of the Chaining of Melkor, when all the Earth had peace and the glory of Valinor was at its noon, there came into the world Lúthien, the only child of Thingol and Melian. Though Middle-earth lay for the most part in the Sleep of Yavanna, in Beleriand under the power of Melian there was life and joy, and the bright stars shone as silver fires; and there in the forest of Neldoreth Lúthien was born, and the white flowers of niphredil came forth to greet her as stars from the earth.'' (J.R.R Tolkien, The Silmarillion, Chapter X, Of the Sindar).
Posted by Patrick Sheridan at 1:39 pm
Email ThisBlogThis!Share to TwitterShare to FacebookShare to Pinterest