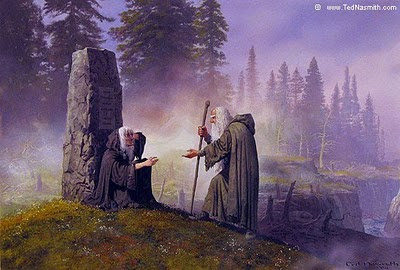 Odd events in my life often remind me of obscure passages in Tolkien. Whilst processing my Returns at work this morning I was reminded of this:
Now Húrin journeyed eastward, and he came to the Meres of Twilight above the Falls of Sirion; and there he was taken by the Elves that guarded the western marches of Doriath, and brought before King Thingol in the Thousand Caves. Then Thingol was filled with wonder and grief when he looked on him, and knew that grim and aged man for Húrin Thalion, the captive of Morgoth; but he greeted him fairly and showed him honour. Húrin made no answer to the King, but drew forth from beneath his cloak the one thing which he had taken with him out of Nargothrond; and that was no lesser treasure than the Nauglamír, the Necklace of the Dwarves, that was made for Finrod Felagund long years before by the craftsmen of Nogrod and Belegost, most famed of all their works in the Elder Days, and prized by Finrod while he lived above all the treasures of Nargothrond. And Húrin cast it at the feet of Thingol with wild and bitter words.
''Receive thou thy fee,'' he cried, ''for thy fair keeping of my children and my wife! For this is the Nauglamír, whose name is known to many among Elves and Men; and I bring it to thee out of the darkness of Nargothrond, where Finrod thy kinsman left it behind him when he set forth with Beren son of Barahir to fulfil the errand of Thingol of Doriath!''
Then Thingol looked upon the great treasure, and knew it for the Nauglamír, and well did he understand Húrin's intent; but being filled with pity he restrained his wrath, and endured Húrin's scorn. And at last Melian spoke, and said: ''Húrin Thalion, Morgoth hath bewitched thee; for he that seeth through Morgoth's eyes, willing or unwilling, seeth all things crooked. Long was Túrin thy son fostered in the halls of Menegroth, and shown love and honour as the son of the King; and it was not by the King's will nor by mine that he came never back to Doriath. And afterwards thy wife and thy daughter were harboured here with honour and goodwill; and we sought by all means that we might dissuade Morwen from the road to Nargothrond. With the voice of Morgoth thou dost now upbraid thy friends.''
And hearing the words of Melian Húrin stood moveless, and he gazed long into the eyes of the Queen; and there in Menegroth, defended still by the Girdle of Melian from the darkness of the Enemy, he read the truth of all that was done., and tasted at last the fullness of woe that was measured for him by Morgoth Bauglir. And he spoke no more of what was past, but stooping lifted up the Nauglamír from where it lay before Thingol's chair, and he gave it to him, saying: ''Receive now, lord, the Necklace of the Dwarves, as a gift from one who has nothing, and as a memorial of Húrin of Dor-lómin. For now my fate is fulfilled, and the purpose of Morgoth achieved; but I am his thrall no longer.''
Then he turned away, and passed out from the Thousand Caves, and all that saw him fell back before his face; and none sought to withstand his going, nor did any know whither he went. But it is said that Húrin would not live thereafter, being bereft of all purpose and desire, and cast himself at last into the western sea; and so ended the mightiest of the warriors of mortal Men. (J.R.R Tolkien, The Silmarillion, Chapter XXII, Of the Ruin of Doriath).
The painting is by the Tolkien illustrator Ted Nasmith. Some of his work is great but he can't paint people. This is not at all how I imagined Morwen, or Hurin for that matter, or the stone.
Posted by Patrick Sheridan at 3:38 pm
Email ThisBlogThis!Share to TwitterShare to FacebookShare to Pinterest