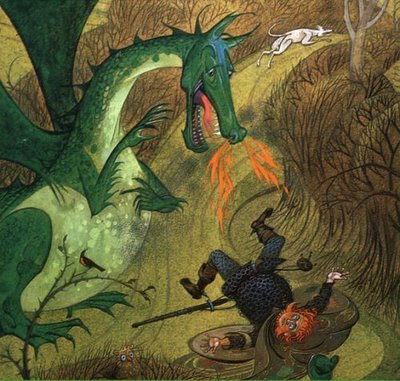 Sometimes I think I'm not clever enough to read Tolkien. The other night I was rummaging through my Tolkien books looking for my first edition of Farmer Giles of Ham, a charming little story I hadn't read since I was doing my A Levels. It has no connexion to the legendarium; rather it's a comic Mediaeval fable. To add authenticity Tolkien even composed a (deliberately-insular) Latin title (expunged, like so much else of worth, from later editions):

Farmer Giles lived in a time when England was happily divided into Petty Kingdoms like Mercia. He was a fat and comfortable farmer with a cowardly dog called Garm (Old Norse for "rag"). Giles becomes something of a celebrity in the Little Kingdom when he scares off a giant with his blunderbuss. The tale of Giles' heroic deeds come to the ears of the comic dragon Chrysophylax Dives who comes to investigate. Giles, by this time an acclaimed hero and armed with a new sword Caudimordax given him by the King, is reluctant to live up to his heroic reputation.

Coming back to my not being clever enough for Tolkien, in my very modest library I have a polyglot New Testament in Gothic and Old English adjacent to the Wycliffe and Tyndale translations published by Dr Bosworth in 1865. I seldom read it because my knowledge of Gothic is minimal (I do have a primer), Old English is legible from a few modern words and I can read Middle English so long as Tolkien's 1922 Vocabulary is at hand. But it is interesting and the preface is highly informative. At the Crucifixion in St Luke's Gospel we read that the Romans affixed a sign to the cross, written in Latin, Greek and Hebrew characters. The Old English translation reads adjacent to Tyndale's:

His superscripcion was written over him in Greke, Latin and Ebruc letters, This is the kynge of the Iewes.


Anyway, I was drawn to the word leden in the Old English translation. This reminded me of a sentence in Farmer Giles in which the dog observed that "book-Latin was reserved for their betters." Now, I hadn't noticed this before but this is of Old English derivation. It comes from boc-leden, or the literary language. Farmer Giles is full of philological jests; its humour is as much in the comic dragon as the choice of names. The bad king is called Bonifacius, for example! Nevertheless, you have to be much cleverer than me to fully enjoy Farmer Giles. Probably only a philologist would fully "get it."

Harper Collins have recently published a new edition of Farmer Giles of Ham. It would make a nice present for your significant other, I think.
Posted by Patrick Sheridan at 9:00 am
Email ThisBlogThis!Share to TwitterShare to FacebookShare to Pinterest