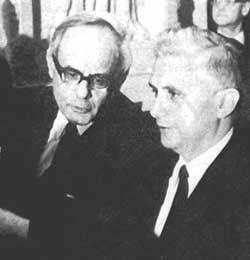 In October 2010 I wrote about my disdain for the Sedevacantists. These days I think I actually prefer them to the mainstream traditionalists; for the simple reason that they admit some problem with the modern papacy relative to the propagation of novel doctrines. Their rationale is more simple than the mainstream lot. The modern papacy, whether that starts with John XXIII or Paul VI, cannot possibly be valid because "modern popes," having declined the tiara and the sedia gestatoria and having refused to pronounce any anathemas at the Second Vatican Council, expressly contradict the mores of pre-Conciliar popes. Where Pius XI said in the encyclical Mortalium Animos that ecumenism was to be shunned by the faithful, the decree Unitatis Redintegratio of the Second Vatican Council, promulgated scarcely forty years later, says that it is to be welcomed; yea more, antipope Paul VI went so far as to bring protestant heretics and schismatic Greeks into that most holy of all places, St Peter's pagan basilica, where they undoubtedly dominated all discussions at the pastoral council!Where Pius IX condemned religious liberty in Qui Pluribus, the declaration Dignitatis Humanae of the Second Vatican Council, promulgated by Paul VI, endorsed religious liberty. Where Pius IX absolutely condemned modernising the Roman church in any way in his famous Syllabus of Errors the constitution of the Second Vatican Council Gaudium et Spes advocates this as a boon for the church! (Incidentally, when I was a student at Heythrop College, I brought this matter up with my Fundamental Theology professor who simply said that the authority of the Roman pontiff is less binding than that of an ecumenical council...just think, if he'd only met Pius VII!) Cardinal Ratzinger later wrote of Gaudium et Spes as a "counter-syllabus," an instrument with which the Roman church could reconcile herself to the modern world!

Am I the only one here who can see any discrepancy? You can't have the unity of faith and a genuinely Catholic sensus fidei with your 19th century great-great grandparents if they were constrained by their ecclesiastical masters to believe one thing and you are called upon to believe something totally different! Or perhaps, as Cardinal Ratzinger applied to Gaudium et Spes as much as to the liturgical books of 1962, there is no real problem with holding two mutually-contradictory beliefs in one's mind and believing both simultaneously; we call that the hermeneutic of continuity! My problem, of course, is that I have always held that the older a particular custom, law, belief, ceremony can be proved to be, the greater auctoritas it holds for us to-day and therefore it is more binding on us; it is behoveful for us so to hold ourselves as tributary to our salvation. And so, what place does the hermeneutic of continuity have in the Church? It's just windy rhetoric! The truth needs no assistance. Only lies require so much maintenance and revision. The principle of the hermeneutic of continuity is the means by which the Roman church consistently re-invents herself so as to perpetuate her presence throughout the ages.

That is why the Sedevacantists are more sensible than their mainstream traditionalist brethren, who bind themselves to the Roman pontiff. The Sedevacantists hold to certain principles; they might be wrong, but they are principles. The traditionalists, by contrast, must maintain their communion with the Roman pontiff at all costs, and they just watch as their feebly-held principles, some of which they share with the Sedevacantists, are eroded away in the modern Roman church. There is no greater evidence for the fallacy of their position than the changing incumbent of the Roman see itself! The response to the election of pope Francis on Rorate Caeli was quite telling!
Posted by Patrick Sheridan at 9:00 am
Email ThisBlogThis!Share to TwitterShare to FacebookShare to Pinterest