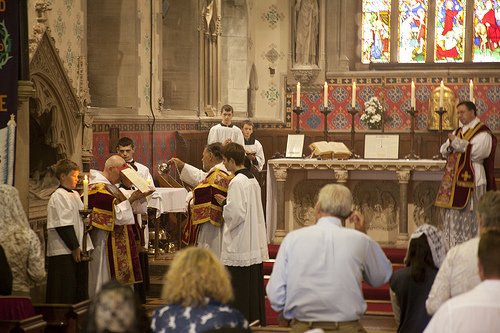 Without getting too bogged down in questions of sacramental theology (for which I am by no means qualified anyway), there seems, to me, to be something very improper about an ordained priest dressing up as a deacon or subdeacon for the purposes of high Mass. Some would say that a priest is a deacon by reason of his ministry, according to the Roman understanding of the sacrament of order, but I'm not so sure. Even worse are cases where a priest ordained after 1973 (the year in which Paul VI abolished the minor orders and subdiaconate) dresses up as a subdeacon, having never actually been ordained thereunto. Or the famous case where Marcel Lefebvre, after lecturing on the liturgical dignities accorded to bishops, celebrated a missa cantata!

If you are a priest, then celebrate the Mass as the delegate of your bishop as a priest; that is your ministry and vocation. Don't go about dressing up as deacons just so that you can wear a dalmatic for a nice change and then go off and celebrate a low Mass away from the people. Vatican II, with some success I think, did restore permanent deacons! But that's one of those awful anachronisms; I was forgetting that traddies don't like permanent deacons! They'd also sooner a priest act as subdeacon than a lay person, which is the custom of Anglo-Catholic churches. What is the objection here? If a layperson can act as master of ceremonies and boys can be acolytes, why may a layperson not wear a tunicle? In a parish with limited means, this would make more sense to me. The idea of common prayer, of corporate worship, the spirit of liturgy, is to offer our utmost to the Most High, to use every resource within our reach to procure the finest possible celebration of the liturgy. So to deliberately simplify the celebration of Mass because you don't have three priests at your disposal is absurd!

Five or six years ago I served a high Mass at Covent Garden and going about the business of preparing the sanctuary I overheard three priests debating among themselves who was to do what, one of whom said: "I don't mind what I do." I thought then, as I do now, how strange that sounded.

I've borrowed the photo from Dr Joseph Shaw's blog; I hope he doesn't mind. Andrew Southwell, whom I knew at St Bede's Clapham Park, is celebrant here, with John Hunwicke as deacon.
Posted by Patrick Sheridan at 7:00 am
Email ThisBlogThis!Share to TwitterShare to FacebookShare to Pinterest