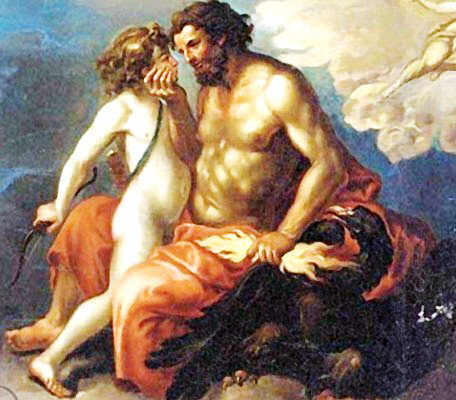 Who else but Ganymede?

This is a comment I made four years ago on the "sodomy delusion" fueled by the Scholastics:

"I have my feet in both camps, you might say. I find the concept of civil partnerships (even for men and women) repugnant and offensive - it is not matrimony and so both parties are simply fornicators, and living in a state of sin. Two men cannot marry (how could they possibly marry?), two women cannot marry. Matrimony is a Sacrament for man and woman who come thereby together to form one flesh and to mirror the Triune love of the Almighty in the bearing of children. A representative of the State giving witness to a kind of pseudo-''marriage,'' between two men or two women (which can only undermine the Family and the Church) is merely bearing witness to a very odd, very wrong, union. Nature turning in on itself, marriage turned upside down - name your cliché. The two parties would do better to enter a monastery and live chaste lives. It has nothing whatsoever to do with Love, and the parties involved cannot possibly hope to live godly, upright lives in the fear of the LORD.

"However, I do not agree with the Roman church's teaching about homosexuality, neither the ancestral Sodomy delusion fueled in the Middle Ages by the Scholastics, nor the arguably worse situation nowadays where the pope of Rome is practically barring homosexually-inclined men from pursuing their vocations to the priesthood. What right has he to do that? Did the Apostles withhold the Sacraments from anybody but those who did not confess Christ? How could you possibly expect me to happily confess that my feelings (to which God alone is Judge, and He is Just) are ordered to the destruction of the Church, society, the family etc; that I am the lowest form of life on this earth, that I am worthy of a thousand anathemas? Superstition and fanaticism!

"Although there had been rulings from the Christian Emperors against sodomy, and the Fathers are quite vituperative about it, St Thomas Aquinas played a distinctive role in the onset of the "sodomy delusion." In a crucial passage of the Summa Theologica (I-II, q.31,7), he falsified material which he had borrowed from the Nicomachean Ethics (VII v3-4, 1148b). There Aristotle had explicitly stated that sexual attraction to men (venereorum masculis) could be motivated either by nature (natura) or from habit (consuetudine). In his commentary on the Latin text of Aristotle, Aquinas dutifully admitted that such unnatural pleasures could be sought and experienced "ex natura corporalis complexionis quam acceperunt a principio." But in the Summa Theologica he suppressed this concession to assert that what is contrary to nature (quod est contra naturam hominis) may "become connatural to a particular man" (fiat huic homini connaturale). "Connatural" does not here mean innate or inborn but is applied to feelings that have so fused with the personality of the individual as to become, as it were, second nature. And so Aquinas superimposed the sodomy delusion upon his exegesis of Aristotle and incorporated this into what would later dominate Latin theology well into the 20th century.

"What are my views on homosexuality and the Christian religion? Well, I dislike the label "homosexual" (a 19th century invention by Jewish sexologists), since I view the human sexual condition as on a spectrum (like autism), differing forms of deviation from the "centre," as opposed to the gay/straight pigeon hole. Greek love is the highest form of affection known to man (Wilde), in my opinion. Fundamentally, we are all called to chastity, and to put on Christ. It behoves us who are at the superior end of the spectrum (that which makes us interesting!) to channel our inclinations to something fruitful and chaste."

I agree with most of this except any references to superiority. I suppose to-day I might be classified as a self-hating queen. And equating modern homosexuality with Mos Graeciae is an anachronism.
Posted by Patrick Sheridan at 9:00 am
Email ThisBlogThis!Share to TwitterShare to FacebookShare to Pinterest