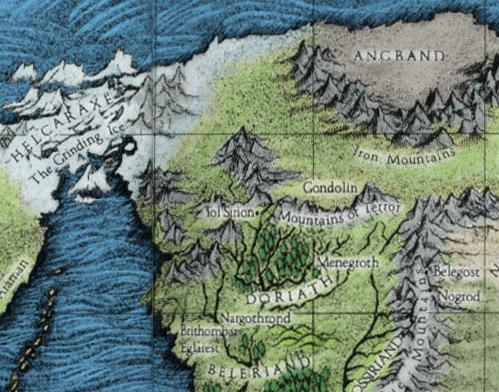 This post has nothing to do with the curious tradition of Roman Rite deacons and gospellers proclaiming the Gospel northwards. That developed, as I recall, out of episcopal liturgy and the customary etiquette surrounding turning one's back to the bishop and to which was later appended this northward theological interpretation. What rubbish. It would be better to have the Gospel proclaimed in the midst of the congregation eastwards. This would better suit the twofold end of the Gospel as an act of worship first and for the edification of Christ's faithful second.

No, I was thinking here about Tolkien's placement of Hell (Angband) in the North of Middle-earth. He once said that that was the traditional direction of evil and no Tolkien scholar, to my knowledge, has picked up on this.
Posted by Patrick Sheridan at 9:00 am
Email ThisBlogThis!Share to TwitterShare to FacebookShare to Pinterest