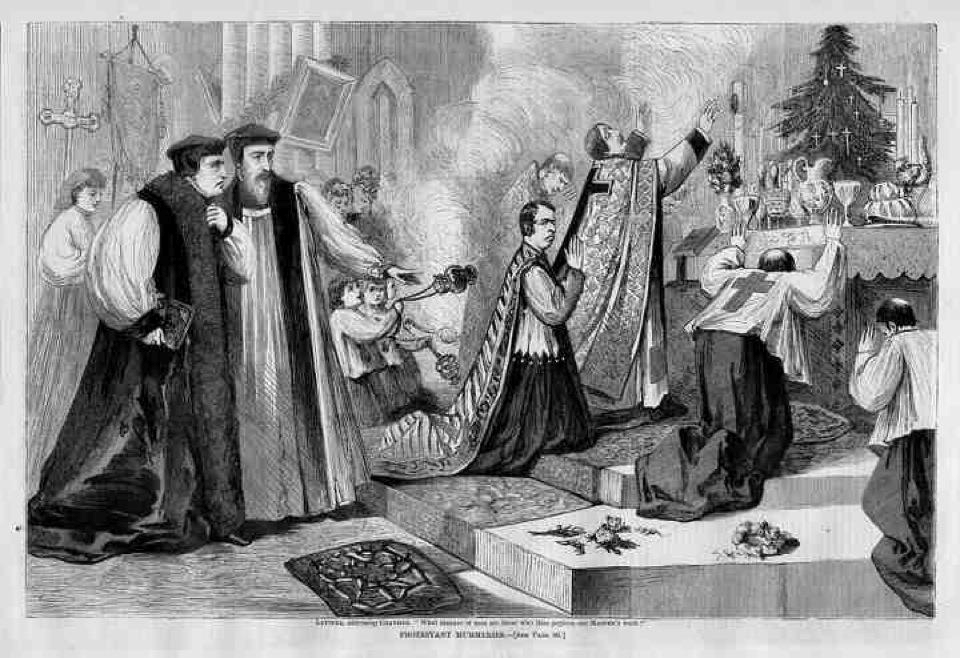 The comment thread on Fr Chadwick's post referencing my own curt post on elevations and reservation, and what I would do, has become increasingly annoying. It all seems to come down to questions of tolerance, an issue about which Fr Chadwick and I are oft at variance, and I have to say I find that kind of cosy, inbred and condescending disposition largely informed of politics that have nothing to do with the Gospel. It's almost as if I were to present my case forcefully and convincingly before a panel of snooty clergymen, who then discuss it in my absence, and then summon me back only to say loftily, "oh, all very interesting, Patrick, but we rather think we'll keep our heathen totemism; but by all means go off and put your ideas into practise on your own!" Which is but to say "bugger off, we aren't interested." And you can imagine the one in the middle waving his hand dismissively. It's like the argument I had with the Traddies about Signum Magnus/Gaudeamus in a pub on the Strand in the summer of 2011. I won the argument by appeals to Tradition, theology, reason and moral uprightness; and I had everybody at the table (with one exception) convinced against Pius XII. What difference did it make? None whatsoever! I concede that they were all convinced and would singly look thenceforth with renewed judgement on the new propers; but would any of them put up a spirited defence of tradition if their parish priest dictated that they would use Signum Magnum until the End of Time? Of course not! The euphoria and clarity are fleeting and seem only to last while I am around myself. Why? God only knows that, but I expect the spinelessness around their parish priests has something to do with clericalism and the fact that any sound arguments for tradition tend to come from people like me; notorious Patricius, whom everybody knows but whose existence is kept a stark secret.

The reason I find this whole issue annoying, well to the point of rage actually, is because my views are nowhere manifest in this world and so whenever I raise a point on liturgical and eucharistic heteropraxis for consideration, and thereunto that it might, heaven forbid, be put into practise, it might be discussed airily by a few people but is still treated with the kind of condescension I have described above. Some might say, "well, why don't you march with soldiers into a pub like Hitler in 1923 and impose your ecclesiastical views by rebellion!" What can I say to that? It's ridiculous. All I can say is that I have been part of a parish but it was a failed experiment; I was turned out actually. During the three and a half years of my time in that parish (whose menace is, thank God, no more), do you think that any one of my views was taken seriously, still less put into practise? Of course not. For example, my suggestion that we might have Terce before Mass on Sundays was met with the harshest criticism. Think of that! A very short, probably ten minute, service to make the LORD's Day more fitting and even the suggestion was unthinkable. Another suggestion that we might reduce the number of torch bearers similarly fell upon deaf ears. Throngs of miscreant kiddies on the sanctuary naturally add to the dignity of a celebration.

Over my time there I put forward similar suggestions, none of them too radical, and they were all summarily dismissed. I would ask therefore, were any of them unreasonable? If not, and they are not, then why on earth should I be tolerant of the dissenting view? Maybe I would be more tolerant if I could go to a church and find there something even faintly agreeable. As it happens, I cannot and have often come away from such churches feeling nauseous.

UPDATE: There are now more comments on Fr Chadwick's post, one of which says that I offer here no theological justification for the nine points. I have deliberately left questions of theology blank for two reasons; 1, I am not a sacramental theologian and; 2, my rejection of such things as Corpus Christi (ruinously popular) is logically a rejection of the supreme liturgical maxim turned in on itself. I shall deal more on this in a subsequent post.
Posted by Patrick Sheridan at 9:00 am
Email ThisBlogThis!Share to TwitterShare to FacebookShare to Pinterest