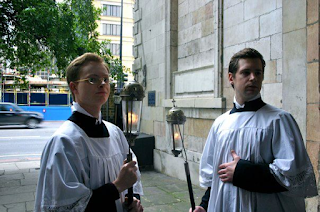 In his book The Heresy of Formlessness Martin Mosebach writes affectionately of his childhood experience of the LORD's Day. His Catholic mother would listen out for the church bells summoning the people to Mass; she would then wait a while, listen out for another bell, wait again, and then set off so as to successfully avoid hearing the sermon. Meanwhile his Lutheran father, comfortable in his own priesthood, would retrieve a handsomely bound German Bible and concordance and read the appointed passages for the day which were, for the most part, identical with the cycle then used by the Roman church. I think I have settled for this latter kind of Christian faith. I don't like being outside and I certainly resent having to travel over twenty miles into London (Babylon the Great) every Sunday to an overcrowded church full of ethnic Slavs. The men look like orcs! And to what purpose? Is my commute a kind of personal via dolorosa? Do I gain merit with the Most High by choosing Sourozh over ROCOR? I have often accused Roman Catholic traditionalists of a kind of spiritual triumphalism in many of their beliefs and practices but for someone like me there is really no moral difference between that kind of triumphalism and the personal via dolorosa I have just mentioned. To feel any kind of satisfaction on Sundays for having attended a particular kind of service at a particular kind of church must surely be a sin.

I wish I could say I was an old fashioned Anglican.
Posted by Patrick Sheridan at 12:45 pm
Email ThisBlogThis!Share to TwitterShare to FacebookShare to Pinterest