Tolkien wrote some of his finest literature under shell fire or in hospital during the Great War so my own excuses of writer's block and an atmosphere of tension unconducive to my way of thinking seem a bit spurious. Having said that, I am having some difficulty because I have written, so far, to three academics beseeching their help in compiling a bibliography for my project and not one of them has replied. Who knows, maybe they are indeed rather busy but it seems more likely that they dislike me personally and would see my little project run like a trickle of water into the sand. I have long been resolved to say something eternal about Tolkien because his work is the only subject on which I can pronounce authoritatively and it would be a terrible waste if the project were abandoned because certain people with their high policies thought so little of me.

That is, in a nutcase, the only real reason you have heard almost nothing from me recently. 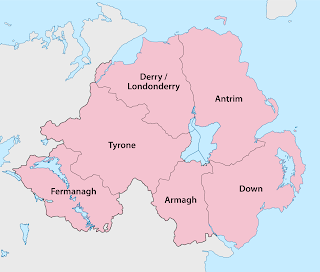 In other news, His Royal Highness Prince Charles and his wife have been in Ireland this week. Shaking hands with Mr Adams, diplomatically referring to "these Islands" in a speech at the National University of Ireland, and other conciliatory gestures. I don't know; I despise Irish politics. Maybe that's because my family come from Ulster. See the map? My Irish family come from the county with the sectarian name.

UPDATE: More comments can be read here.
Posted by Patrick Sheridan at 6:46 pm
Email ThisBlogThis!Share to TwitterShare to FacebookShare to Pinterest