Did they know? Oh, yes they did! 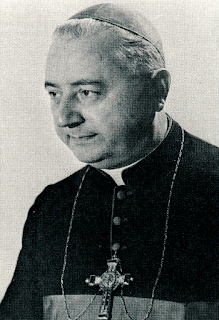 Poor old Bugnini, always being blamed for everything...

Rather like how that old fraud Marcel Lefebvre claimed, years later, that he only signed the conciliar decrees to indicate he was present at the Second Vatican Council and not to endorse them (!), I think the idea that the Novus Ordo was suddenly sprung upon an unsuspecting episcopate (who famously did so much to resist its implementation), who knew nothing about it until the late 1960's, is...cobblers, to be frank. It is well known, even if some choose to deny the knowledge, that all the revolutionary aspects of the new rite were being planned in detail at a series of liturgical conferences, beginning at Maria Larch in 1951, and organised by various liturgical scholars in consultation with the commission set up by Pius XII in 1948 for the general reform of the liturgy.

Do people suppose that these conferences were clandestine affairs? Illicit congresses of Freemasons and conspirators? That some of them probably were Freemasons notwithstanding, these conferences had the enthusiastic support of the Sacred Congregation of Rites and Pius XII himself, and their conclusions were sent immediately to Rome at the deliberate request of the pope. As Colonel Ross-Duggan observed from his trip to the Lugano Conference in 1953 (emphasis my own):

"There was every evidence that the Holy Father, the Sacred Congregation of Rites and all higher authorities were very seriously interested in our deliberations." (Quoted in Pecklers, "Dynamic Equivalence: The Living Language of Christian Worship").

J.D Crichton said of the Lugano Conference (emphasis my own):

"It should be a great relief to know that the Holy See is taking a very active part in this reform of the Liturgy. And perhaps we may sat at this point that if 'reform' sounds too strong a word, what the Church is seeking to do is to adapt certain parts of the Liturgy so that the people may take their rightful part in it more fully and with greater profit." (Crichton, "Rome and Liturgical Reform"). 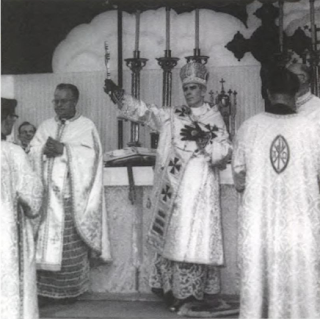 Fulton Sheen "experimenting" with vernacular liturgy in 1955. A Byzantine mitre, and Roman gauntlets, and a bit of lace.

There is further proof out there, that is if you care more for knowledge than propaganda, but, as you can see, the idea that Pius XII was invincibly ignorant of what was going on is as credible as the Flat Earth Society. So what about the bishops? Well the Commission set up by Pius XII in 1948 wrote to all Metropolitans and Archbishops asking for their views on liturgical reform, and some of their responses were quite revolutionary (which surely indicates a liturgical malaise and ignorance already engendered that had no need of the "spirit" of the council, no doubt already in the planning, to provide later?). One wrote back with the suggestion that the Divine Office should be streamlined to bring it more into line with the abortive Quiñones breviary (recognisably the Prayer Book offices of Mattins and Evensong). Another, the Archbishop of Dakar (you can look him up here), was a tad more conservative than this but later denied any knowledge of these nascent reforms. All these things can be read in the Congregatio Sacrorum Rituum, Sectio Historica.

The benefits or malefits of these reforms have been debated far too much, and there is no consensus about what to do for the best. Probably nothing, and that it's a dead horse - that's my belief. The Roman Rite is finished. The liturgical scholars appointed by Pius XII for his commission were the ecclesiastical equivalent of our contemporary political elite; that is people with a measured amount of ideology and contempt for the lay people and their own patrimony. The pope, with all his "Petrine" authority, played his part to the end, but what shall we say of the bishops? That these people supinely allowed these reforms to take place, and enthusiastically imposed them in their dioceses, really says something about the problems fraught in having an episcopate appointed directly by Rome rather than elected by a cathedral chapter, and consecrated without reference to Rome.

Who is to blame in all this? Well, you may say that the Novus Ordo is the triumph of the "experts," or Freemasons, if you like, but I take the view that the buck stops, as in any organisation, with who is in charge. Who appointed the commission? The pope. Who personally chose Annibale Bugnini to chair the commission? The pope. Who sanctioned their reforms? The pope. Who carried out and completed the reforms, before, during and after the Council? Three popes. Who had no intention of reversing these reforms, even if they could be reversed? The pope. It's dead, it's gone, it's finished. And that's just the Roman Rite! How long before the Uniates, with their bastard Byzantine rite suffer a similar fate? Already Robert Taft has called for a general reform of that rite. Mark my words! Rome just cannot help it. It relishes nothing more than tearing something antient to pieces and reconstructing it in its own image. After all, what is the modern Roman Rite but a kind of Frankenstein's monster?
Posted by Patrick Sheridan at 7:24 pm
Email ThisBlogThis!Share to TwitterShare to FacebookShare to Pinterest