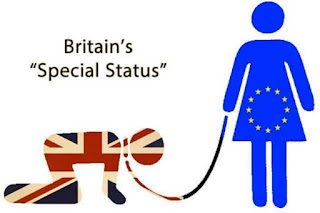 I haven't felt this elated about British politics for as long as I can remember; probably never. I bless God that to-day I cannot say with Húrin of his own people, that as thralls they have found thrall hearts. On the contrary, as thralls they have found courage and have smitten the face of that godless, tyrannical monster and leach on the continent to which we have all been vassalled for years. Now we can hope that the nascent empire of Antichrist will begin to crumble as men of faith in France, Germany, the Netherlands and elsewhere take heart and follow the example of the British, once again a beacon and example to the nations, and begin to dismantle this unholy union in their own lands.

But it's only the beginning. It is not enough for us to have left the European Union. We need also to leave the Common Market, and abandon the nation-killing principle of free movement. We need to see the destruction of the two main political parties in this country and their replacement with parties of principle, of faith, built on trust and the confidence of their voters rather than the radical left and virtually indistinguishable parties who arrogantly disdain their voters that we currently have (whose membership has plummeted anyway). We need to see a renaissance of Orthodoxy in this country. We need to systematically dismantle the principles of inclusion, diversity and multiculturalism. There are so many issues to address that I actually don't feel that this referendum is good enough on its own, and will not (I feel) achieve the desired result. I said earlier that I feel elated, but that will pass. The referendum ought to signal all the things that I have mentioned, but who can say that it will do so? Already we've heard Nicola Sturgeon's aim of holding another ("once in a generation!") independence referendum for Scotland. Martin McGuinness has called for a united Ireland after the nationalists voted in favour of "remain," because that's in the interest of Sinn Féin. What about London? I live in the borough of Bexley, which voted 63% in favour of leaving, in sharp disparity to the rest of the metropolitan area. Will London also secede from an independent England? Will the United Kingdom disintegrate completely? Will England be balkanized into a few insignificant districts? The future is greatly uncertain. If London does have its own unique border, and becomes a new "international" city, then the English capital must move to Winchester.

Of course, I don't believe that any union on earth is sacrosanct. The Angevin "empire" was no more sacrosanct than the United Kingdom or the European Union. There is nothing more special about huge feudal empires than there is about utopian political ones. Tolkien hated the union too, and would no doubt have despised the European Union, for cultural and linguistic reasons, but also because he was an anarchist (like me). Nothing is certain. For the time being things will go on as they have done, but who knows what things will be like two, ten, thirty years from now. Either we stand at the crossroads of a new, brighter future (or a bleak one), or things will remain as they are and this will have been a costly, nasty waste of everybody's time, and a cheat of their sincerest hopes. The latter seems much more likely to me. As if the empire of Antichrist could be defeated by the democratic voice of simple people!
Posted by Patrick Sheridan at 12:34 pm
Email ThisBlogThis!Share to TwitterShare to FacebookShare to Pinterest