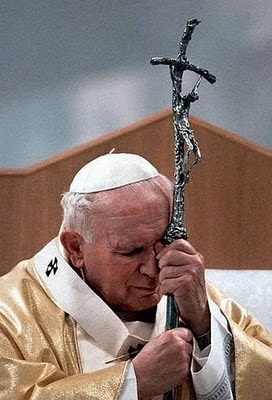 The other day a reader kindly sent me the link to an interesting article on The Anglo-Catholic. The article, entitled The Proto-History of the Roman Liturgical Reform by Dr Geoffrey Hull, deals chiefly with the liturgical reform, but also touches upon Jansenism - the author even says that many of the ''antiquarian'' ideas of the liturgical reformers in the '60s (not so much the '50s - their ''restoration'' was nothing of the sort, whereas many of the reforms of the '60s were genuinely older than the Missal of Pius V) were themselves modern descendants of Jansenist liturgical ideas in the 17th century. He also astutely points out that the Ultramontane Papacy ultimately led to the Novus Ordo of Paul VI. Here is an interesting quotation, which I think pretty much sums up my fierce objection to the Ultramontane Papacy:
Unfortunately, there is ample evidence today that the modern Popes consider themselves the infallible arbiters of disciplinary and liturgical tradition rather than its respectful custodians. John Paul II, for example, has been known to act arbitrarily and inconsistently in contravention of established liturgical law. One famous episode was during his visit to West Germany in 1980 when, in contradiction to the firm Papal policy of not giving Communion in the hand, he administered the Sacrament in this manner to a small boy by way of exception, thus establishing an irrevocable precedent. On another occasion, I am told, the Pope incorrectly knelt during a Papal ceremony in Rome, and when his Master of Ceremonies discreetly directed him to rise, John Paul remained on his knees and retorted pointedly: “II Papa s’inginocchia!” – “the Pope is kneeling!”. With such a subjective attitude towards liturgical tradition, unthinkable in any of the Eastern Churches, it is understandable that the modern Popes and the ultramontanist Curia should view traditionalist rejection of the liturgical reform as incompatible with Catholic orthodoxy which they narrowly understand as right belief and right morals.
I never liked Pope John Paul II, and certainly was not among the many thousands shouting out ''Let the Great John Paul be canonized immediately'' when he had at last gone to his long home. Clearly the attitude expressed in the above paragraph indicates that he thought he was above Tradition. A clever M.C I know and I were discussing the dignity of pushing and pulling about bishops unfamiliar with Pontifical ceremonies at Pontifical Masses once, and he rightly said that ''the bishop does whatever the M.C tells him to do;'' naturally, since the M.C, who is familiar with the ceremonies, is there to ensure that the entire function conforms to the liturgical tradition of the Church. If the bishop (or Pope) decides not to adhere to Tradition then there is a serious aliturgical problem.
Read the whole article here.
Posted by Patrick Sheridan at 1:32 pm
Email ThisBlogThis!Share to TwitterShare to FacebookShare to Pinterest