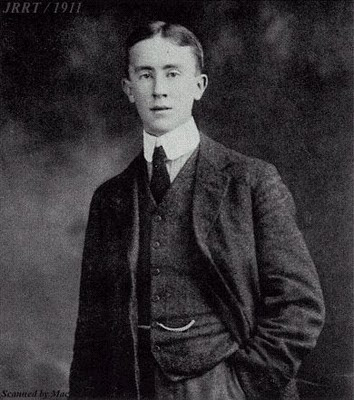 J.R.R Tolkien as an Undergraduate in 1911 - at the time of Pius X's reform of the Breviary.

J.R.R Tolkien in August of 1973 (the last known photo taken of him) next to his favourite tree in the Oxford botanical gardens. I wonder what he was thinking then.

As for Roman prejudice - I think that it behoves traditional-minded Catholics to look around at their own Church before they attempt to criticize others, and to concede that not all the answers can be found in Rome. Many of the traditions of the Latin Rite can be found in the Book of Common Prayer, and much that was once common to West as well as East can be found in the Byzantine liturgical books. In an age of Ecumenism, the greatest possible ecumenical gesture on the part of Rome would be the cultivation of its own Traditional Liturgy and the abandonment of old triumphalist prejudices.
Posted by Patrick Sheridan at 1:32 pm
Email ThisBlogThis!Share to TwitterShare to FacebookShare to Pinterest