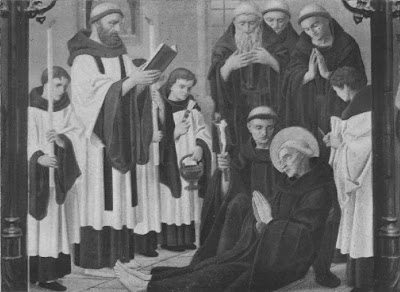 The Surplice is the common choir dress of the lower clergy. Its name comes from the Latin super pelliceum which means ''over the fur;'' and it originally developed in cold northern countries (far removed from Rome, most likely England and northern France) where it appears to have been an adaptation of the Alb worn over bulky fur garments in the singing of the night offices in cold churches. This is why the Surplice, unlike the Alb, has wide sleeves and is worn loose (ungirded).
By the 11th century the Surplice appears to have become a common choir dress in Northern Europe. It wasn't until the 13th century that the Surplice came to Rome. By this time it was common to all clergy, at whatever function, whether assisting at the Altar at Mass (the Celebrant and Ministers still, however, wore the Alb), or assisting at other functions. By the 12th century the Italian word ''cotta'' was introduced, and if there was a difference between the Surplice and Cotta (at this time) it was that in Italy the cotta was slightly shorter than elsewhere, although at the beginning of the 16th century it still fell below the knees. 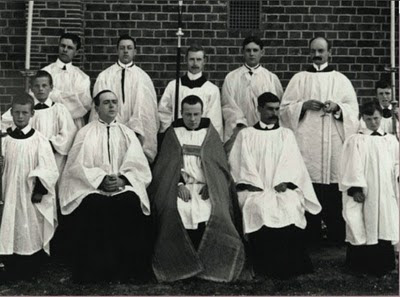 This photo depicts that learned and apostolic man Fr Adrian Fortescue with his retinue of Servers. Notice that they're all in laceless traditional Surplices.

The Surplice was always long, and plain, but gradually became shorter and more decadent. In the Middle Ages it was seldom decorated, but by the 17th century, when lace ornamentation was in vogue, it is not uncommon to find the traditional Surplice tampered with. Charles Borromeo was specific in his instruction that the Surplice must not be decorated, or ''too elegant,'' and furthermore that it should have a round rather than a square neck. I wonder how many ''traditionalists'', in their zeal for ''tradition'' (which is really only a romantic hankering after the temporal power of the Popes and the Counter Reformation period, scarcely 400 years old, or not seldom with the more ignorant kind, Catholicism of the 1950s!), know of the difference between the traditional Surplice and the Roman cotta. I am tempted to say that use of a lace cotta is a damnable heresy, but perhaps sympathetic readers (who don't take me seriously) will say: ''he's finally cracked.'' At any rate, according to the author of the article on the Surplice in The Catholic Encyclopedia online, the use of lace had vogue especially in Italy, but it frequently degenerated into undignified straining after effect and effeminate display...
Posted by Patrick Sheridan at 2:37 pm
Email ThisBlogThis!Share to TwitterShare to FacebookShare to Pinterest