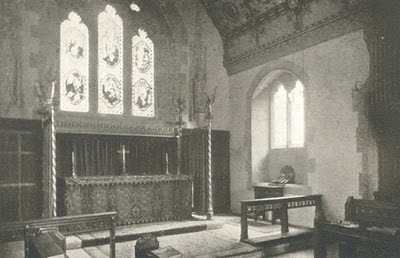 I offer my congratulations to the three new priests who have come over to join us on the astro turf, that is to say, the Roman Church.
However, I must speak my mind and ask what on earth possessed you? You must have been under the false impression that the Roman Church is the true church of Jesus Christ, or at least that the English Church's only connexion to the Catholic Church was from Rome. If so then good luck to you, but don't expect me to share your enthusiasm! I think that you will all go back at some point, or join the Orthodox Church. I know of many ex-Anglicans who once again became Anglicans because something about the Roman Church put them off.
So what will be the reason of your going back? The culture? The Liturgy? The negative doctrine? The people? The Bishops? Rome herself, perhaps? As for me it was a bitter brew with all these ingredients, and Traddieland stirred the cup. It is a fact that only a handful of Roman Catholics worldwide know anything about Liturgy, and most of these are accused of some heresy (like me). Traditionalists, as a rule, are ignorant of Liturgy because of their blind obsession with the revival of 1950s Catholicism, and pro-this and anti-that causes (not to mention their Ultramontanism). Since Liturgy is more important than all that, I would rather go where it is done properly, or at least tastefully, even if this means beyond the confines of Roman jurisdiction. I now have no qualms at all about serving Anglo-Catholic liturgy. My long-term plans ecclesiologically are nebulous, as yet, though 20-30 years from now I can see myself in a ''Western Rite Orthodox'' parish in ROCOR using the Liturgy of Old Sarum. So no lace (the very use of which I find so utterly repugnant as to warrant a most severe punishment), no big six, no Great Elevation etc, just pure Medieval Liturgy, unmutilated by popery.
If Roman Catholics find my views about the Papacy objectionable then perhaps they'd care to make earnest study of the history of Liturgy since the Council of Trent. It's quite grim reading to be honest, with succession after succession of Popes doing whatever takes their fancy with it.
Posted by Patrick Sheridan at 6:32 pm
Email ThisBlogThis!Share to TwitterShare to FacebookShare to Pinterest