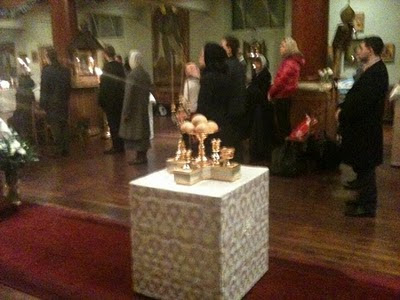 ...quem Magi gaudent suppliciter adorare. (But he is the Lord of all men whom the Magi rejoice humbly to adore). 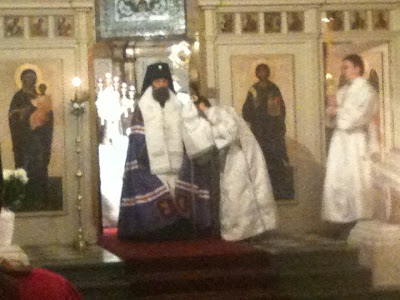 Yestereve I went to the Russian Orthodox Cathedral at Ennismore Gardens for evening liturgy of Theophany, which was worth the effort. I had to run to my local railway station (I had other commitments throughout the day), and due to extensive roadworks at South Kensington had to pass within sight of the Temple of Baal (and I don't mean the Latter Day saint hall!), but these were small prices to pay. The Bishop was received at the West Doors by two ministers - I think they were Readers, but they were wearing a (what seemed to my untutored eyes) short orarion; later these two held the triple candle for the Bishop at various points, such as the incensing of the church at the beginning, with the two Deacons in procession. Quite dull to start off with, with two cantors monotoning the prayers, but after the Lord's Prayer the priests all came out from the North and South doors of the Iconostasis and it got interesting. Five loaves were solemnly blessed (Artoklasia, a kind of Antidoron I expect), and were cut up and administered to the congregation afterwards (I partook myself, after venerating the Icon of Christ's Baptism and having my head anointed by the Bishop). 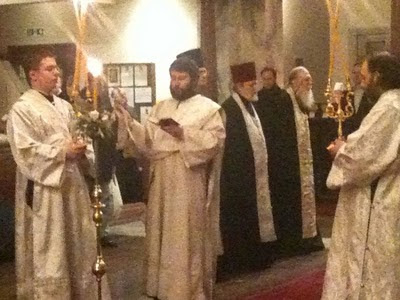 It's interesting that the Protodeacon holds the orarion (stole) aloft in his right hand whilst chanting from the book. It seems a rather obsolete custom since initially the reason he held aloft the orarion was in order to keep his eye on the text. Is that a priest-monk in the background (the elderly one without a kamilavka)?

I know very little about Russian Liturgy so rather than blabber on about it I'll just let you look at some photos I took on my iPhone (apologies that the quality isn't great). It is interesting that the Russians were celebrating the Baptism; in the West we remember the visit of the Magi on Epiphany, and the Baptism and Marriage feast of Cana afterwards; all manifestations of Christ's Divine nature though.

A very blessed Epiphany to you. 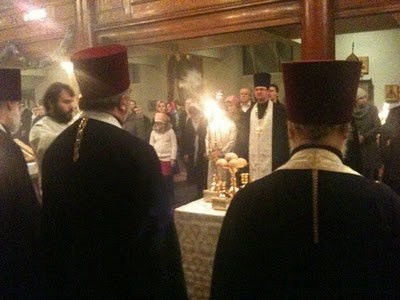 The Protodeacon incensing the loaves. 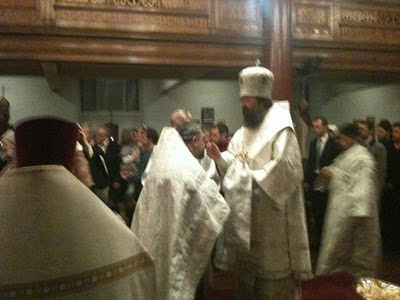 The Bishop anointing one of the Cathedral priests.
Posted by Patrick Sheridan at 12:02 pm
Email ThisBlogThis!Share to TwitterShare to FacebookShare to Pinterest