What alternative is there? 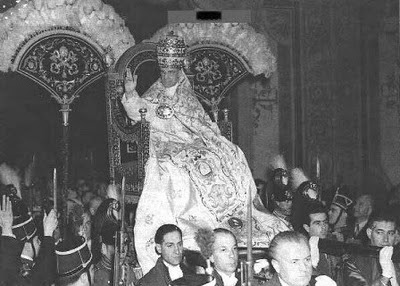 The Bishop of Rome, the Supreme Pontiff of the Catholic Church, faithful steward of the Divine Deposit, bulwark against heresy, successor of St Peter, vicegerent of Christ on earth, guardian of Tradition. This is what I used to believe, and was indeed led to believe.
But...if the Bishop of Rome is demonstrably not everything the Roman Catholic Church makes him out to be, what is he then? Is he just a kindly old man with delusions of grandeur, or just harmlessly misled? Or is he rather Christ's enemy and a demented megalomaniac, exalting himself in the Church of Christ and bent on the suppression of liturgical Tradition? I am not talking about personal scandal, but rather the magisterial imposition of systematic abuse on every godly and orthodox Catholic in Europe.
I believe, and have felt for some time now, that Pius XII (at least) was an Antichrist, and that such violence as he contrived against Tradition would be the envy of the most reprehensible Iconoclast of the 16th century. This is the uttermost choice, and the litmus test of one's ''loyalty'' I suppose (though to what? a pathetic has-been? The Roman Church is finished) - either Pius XII's reforms were a deliberate exercise of anti-Traditional abuse, or they were just a horrible mistake. Since they clearly fall into the former category, what shall we say of the man himself?
Woe to you, scribes and Pharisees, hypocrites all; because you are like unto whited sepulchres, which outwardly appear to men beautiful, but within are full of dead men's bones and of all corruption! (Matthew 23:27).
Posted by Patrick Sheridan at 2:55 pm
Email ThisBlogThis!Share to TwitterShare to FacebookShare to Pinterest