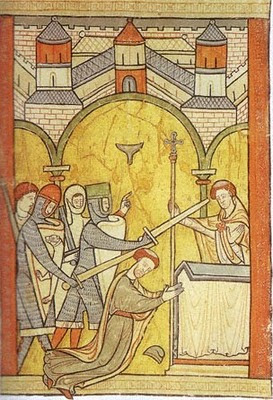 ...and traitors have I nourished and brought up in my household who let their lord be treated with such shameful contempt by a low-born cleric? (Henry Plantagenet is said to have shouted these words at his castle in Rouen, according to his chroniclers, upon hearing the news that the newly-returned Becket wouldn't admit those who had remained loyal to the King to the communion of Christ's Church).
I shamefully neglected to mention one of my favourite Saints in the Martyrology on the occasion of his feast day on the 29th, though since we are curiously within four Octaves (that of the Nativity, of St Stephen Protomartyr, of St John the Evangelist, and of course the man himself, St Thomas of Canterbury), I think I might be forgiven - at any rate I have many other cares and commitments presently. St Thomas of Canterbury was one of the unlikely heroes of the Angevin Empire, a true defender of the rights of the Church, unlikely though this was considering that during his time as Chancellor he was notorious for his worldliness. Henry II (the greatest of all our Medieval kings, for all his faults) desired royal control over the Church, and his choice of Becket as the new Archbishop of Canterbury in 1161 was probably to this end (incidentally he was only a Deacon when appointed to the post - it is a Trad myth that there were no permanent Deacons in the West until Paul VI came on the scene; rather permanent Deacons disappeared once ''Low'' Mass was invented, and the wise initiative of Paul VI was rather a restoration, not an innovation). Unfortunately it didn't work out as the King had planned, and in 1164 Becket opposed in the most militant language Henry's proposal that the English clergy submit to the ''customs of the Realm'', at Clarendon Palace. He was exiled (on trumped up charges of improper use of funds as Chancellor), with a small retinue, to the Cistercian Abbey of Pontigny. In 1170 he returned, after intervention from Rome, and was reinstated as Archbishop, though his reign was short-lived. On 29th December 1170 he was murdered whilst about to celebrate Vespers with the monks of Canterbury. (As an aside, should I start saying Evensong instead of Vespers? I must say I agree with Tolkien (and I think Fortescue) who used Saxon words in place of Romance ones. At any rate I already say Mattins instead of Matins). 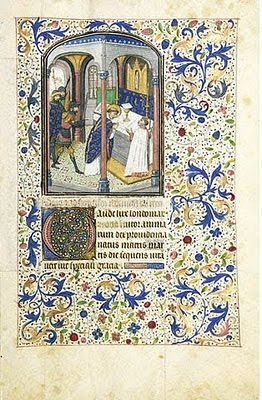 This image, evidently from a Book of Hours made long after the life of St Thomas, is interesting in that it mistakes the Office at which the Saint was martyred for a kind of ''low'' Mass (as it was then - probably not in the Tridentine sense of ''Low Mass'') rather than Vespers. By all accounts and long-standing tradition St Thomas was martyred as he was about to celebrate Vespers in the Cathedral - Vespera erat, nox longissima instabat, as the account of William Fitzstephen, an eyewitness, has it. Notice that the Archbishop is wearing a Sarum blue Chasuble.

Edward Grim has this to say of St Thomas' final hour (I can't for the life of me find St John of Salisbury's account, but I have it somewhere).
Without delay the sacrilegious men entered the house of peace and reconciliation with swords drawn; indeed the sight alone as well as the rattle of arms inflicted not a small amount of horror on those who watched. And those knights who approached the confused and disordered people who had been observing vespers but, by now, had run toward the lethal spectacle exclaimed in a rage: "Where is Thomas Becket, traitor of the king and kingdom?" No one responded and instantly they cried out more loudly, "Where is the archbishop?" Unshaken he replied to this voice as it is written, "The righteous will be like a bold lion and free from fear," he descended from the steps to which he had been taken by the monks who were fearful of the knights and said in an adequately audible voice, "Behold I am here, no traitor to the king but priest of God; what doth it please you?" And Thomas, who had previously told them that he had no fear of them added, "Here I am ready to suffer in the name of He who redeemed me with His blood; God forbid that I should flee on account of your swords or that I should depart from righteousness." With these words, at the foot of a pillar, he turned to the right. On one side was the altar of the blessed Mother of God, on the other the altar of the holy Confessor Benedict - through whose example and prayers he had been crucified to the world and his lusts; he endured whatever the murderers did to him with such constancy of the soul that he seemed as if he were not of flesh. The murderers pursued him and said, "Absolve and restore to communion those whom you have excommunicated and return to office those whom have been suspended." To these words Thomas replied, "No penance hath been made, so I will not absolve them." "Then you," they said, "will now die and will suffer what you have earned." "And I," he said, "am prepared to die for my Lord, so that in my blood the church will attain liberty and peace; but by the authority of Almighty God I forbid that you hurt my men, either cleric or layman, in any way." The glorious martyr acted conscientiously with foresight for his men and prudently on his own behalf, so that no one near him would be hurt as he hastened toward Christ. It was fitting that the soldier of the Lord and the martyr of the Saviour adhered to His words when he was sought by the impious, "If it is me you seek, let them leave."
St Thomas of Canterbury, pray for us.
Posted by Patrick Sheridan at 11:10 pm
Email ThisBlogThis!Share to TwitterShare to FacebookShare to Pinterest