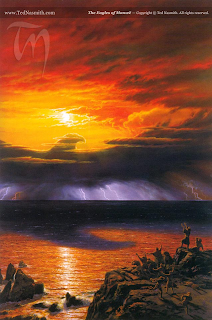 Having been depressed for many months many of my books have become damaged for, having a mind to read something in them, my mind wanders onto some other idea, or not seldom nothing at all, and I give up. Eventually the book ends up on the floor, opened on that page wherein I thought to read something wonderful, buried beneath a mountain of discarded papers, clothes, tissues, even empty food packets, and my room becomes such a state that movement itself becomes impeded. For somebody usually very meticulous about cleanliness and with an innate love of books, you must understand how distressing this is. I was admonished against this treatment of my books last week by a friend of mine, himself a bibliophile, who said that to leave books thus is one of the worst things you can do to them. Of course I have bookmarks in plenty but the idea is that sooner or later I will return to the book, open up and pick up where I left off, in exactly the same state of mind and disposition, as though the day, week or month since last I set mine eyes to the words had never happened. It never works like this, or seldom does anyway.

On the way to work this morning I was reminded of a passage in Aldarion and Erendis, a sad story (indeed the only story) which comes down to us from Númenor. I don't know why but it reminded me of something faintly comforting, you know like a familiar smell, something to quicken one's sense of reflection and piety (you'd be surprised how often one's olfactory perception helps in this way); not exactly a déjà vu, but something reminiscent. I had to rummage for my ''rough'' copy (I am not silly enough to leave first editions lying around), but found it without much difficulty, though not in exactly the condition I left it. The passage goes:

''Riding one day in the forests of the Westlands he saw a woman, whose dark hair flowed in the wind, and about her was a green cloak clasped at the throat with a bright jewel; and he took her for one of the Eldar, who came at times to those parts of the Island. But she approached, and he knew her for Erendis, and saw that the jewel was the one that he had given her; then suddenly he knew in himself the love that he bore her, and he felt the emptiness of his days.'' J.R.R Tolkien, Unfinished Tales of Númenor and Middle-earth.

Coming back to what we said earlier about sense, can you not feel yourself standing there? Those woods must have been wonderful, especially at a time of Autumn. Imagine, it has been raining (all seasons in Númenor at that time were ever apt to the needs and liking of men), you are alone, you can feel the clemency of the Númenórean weather on your skin, a wind comes out of the West bearing a fragrance of Avallonë and causing the leaves of the trees to rustle, a sound which calls to mind the angelic chorus and the creative activity of the Holy Ghost, you look down to the Sea, the direction of all godliness, and you breathe deep and know in yourself that you are under God's protection, that your Sovereign is pious, that you are of a noble people. It speaks volumes to me and it reminds me of what Treebeard says in The Lord of the Rings about breathing, that he used to go up into the mountains and just breathe; or Sam's first experience of Ithilien. Of the wind Tolkien says:

''And when the wind was in the west, it seemed to many that it was filled with a fragrance, fleeting but sweet, heart-stirring, as of flowers that bloom for ever in undying meads and have no names on mortal shores.'' (Akallabêth).

That's not to mention the other side of the aforesaid passage - Aldarion's love for Erendis (oh, don't worry; that soon turned to hatred, anyway), and whatever you can see in that. I haven't quite got around to it yet as my mind is still full of breathing. What I found most interesting about Erendis in this scene was the combination of loneliness and colour, everything is grey-green (it is, though Tolkien does not say so, Autumn), and she seemed almost a ghostly figure passing from one tree to the next, being quickened only by the approach of the King's Heir of Númenor, though she turns to flight.

Sensory perception in Tolkien would make a good (albeit difficult) essay for me. We have seen how breathing the air of Númenor can inspire piety, what about listening? We'll think about that next time.

Art: Ted Nasmith. When the Númenóreans looked westward in the days of the domination of the Dark Power they were greeted not with a fair wind but descried instead great clowds, shaped as it were in the likeness of eagles, and the sunset was darkened for they loomed up, threatening, in token of great wrath, and some bore lightning beneath their wings, and thunder echoed between the sky and the sea; and men said: ''Behold the Eagles of the Lords of the West! The Eagles of Manwë are come upon Númenor!'' And they were filled with dread.
Posted by Patrick Sheridan at 6:37 pm
Email ThisBlogThis!Share to TwitterShare to FacebookShare to Pinterest