Vulgarity of the Season... 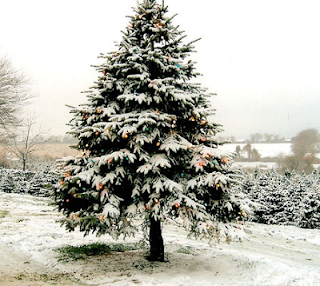 I was dragged Christmass shopping by my parents this morning; yes, on a Sunday morning. If they had decided to go tomorrow I could have had the ''I'm sorry, I'm working'' excuse, but no; moral objections don't seem to count for much in my family. It doesn't matter that I find shopping on any Sunday of the year an abuse of the Lord's Day, we just have to go out and buy everything in sight or Christmass will be ruined.

I was going to give an account of the morning, but repeating myself will only make things worse. Instead, I'd like to know why people become so sensitive this time of year? I mean you can't say or do anything contrary to all the tat without being accused of ruining Christmass for everyone else. Why is this? At work last week we had a ''Xmas dress-up'' week, where you could wear some sort of festive outfit over your uniform. When asked why I hadn't played the part, nor partaken of the ''Christmass dinner'' (Oh, God!!!), I said ''well, 1, it's not Christmass, and 2, that's not food.'' I was given a dirty look but I walked off. The other day my father came home from work and asked why the ''festive display'' lights in the front garden (upon which, by Divine providence, a fox had defecated the night they were put up!) weren't turned on. I said, ''well, why would I do that?'' In a tone of voice which spoke of hurt and dismay he said ''because it's Christmass.'' That was too much for me and I retired to my bedroom. Telling the Philistines about the cycle of the liturgical year will only exhaust the most benevolent of souls. I was sent to find a trolley in Marks & Spencers this morning and so fought my way to the other end of the store through hordes of greedy little orcs, to find another empty trolley bay; returned to where my father was, and he was gone. I thought ''sod this,'' and went into GameStation to look at retro games (the only ones worth playing). I was then summoned by text message to return to Marks & Spencers where I was scolded by my mother, who incidentally hasn't spoken to me for six or seven weeks, turning to my father and saying ''well, why don't we just have beans on toast for Christmass dinner?'' Boo hoo! Is it really the end of the world if you can't find a certain kind of cheese? On the way home they did nothing but complain about the staff, the customers, the layout of the store, and probably me, but I had switched off by then.

Then comes 25th December itself. What a nightmare! Fortunately, we don't have to put up with distant relatives, just my sister, and, as a rule, I refuse to play happy families with her. On the subject of ''playing happy families'' once a year I am reminded of a certain scripture:

Therefore if thou bring thy gift to the altar, and there rememberest that thy brother hath ought against thee; leave there thy gift before the altar, and go thy way; first be reconciled to thy brother, and then come and offer thy gift. Matthew 5:24-25.

In other words, why bother acting as if you care when by St Stephen's Day you've gone back to the way things were? Kind of makes the spirit of Christmass seem rather spurious, does it not? This, together with the greed, the stampede at the shops, the tat, the hackneyed music playing over and over and over, makes me feel rather sour by Christmass morning. Of course, actually telling people this and they accuse you of being an Ebenezer Scrooge! People think I hate Christmass! I love Christmass; what could be more wonderful than to celebrate the birth of the Saviour? But I despise tat and falsehood, and it pains me year after year to see what Christmass has become for most people, and working, as I do, in the retail industry just intensifies that grief, where a feast of the Lord has been cheapened by commercialism and greed, endless greed.

O the virtues of the Julian Kalendar! How wonderful it is to celebrate Christmass as it was of old, and better still, without all the tat, corporate greed and playing happy families that goes with the Papist kalendar.
Posted by Patrick Sheridan at 1:47 pm
Email ThisBlogThis!Share to TwitterShare to FacebookShare to Pinterest