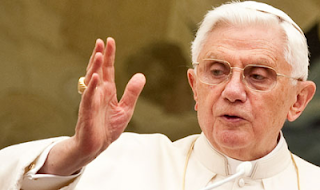 There's a lot of hysteria among Roman Catholics about Mr Cameron's ideas about the exclusion of gay people from marriage, and what he wants to do about it. I personally couldn't care less; I am a confirmed bachelor in both the Victorian euphemistic sense and any other sense you like - I'm not remotely interested in relationships; and besides, it's a purely civil matter. It wouldn't be such a problem if Roman Catholics weren't so clearly homophobic, even if their church tells them to approach homosexuals with understanding and compassion. In my experience they either let on they don't know or they shun you altogether, in the Pauline spirit of ''expel the wicked from among you.'' Quite different if you're a priest of the London Oratory, of course, or you write books about Liturgy.

The Catechism of the Catholic Church says: ''Every sign of unjust discrimination in their [homosexuals'] regard should be avoided.'' Very well. I will not belabour the obvious discrepancy between this attitude and the one enunciated by St Paul, the Fathers and the Scholastics, who place sodomites among the basest of persons, but unfortunately anything the modern Roman church says about the subject, whether condemning homosexual acts, or repeated homosexual acts which lead to homosexual lifestyles, is tainted with fear and abhorrence, which has its uttermost source in the Devil, not God. Is this toleration? If so it has come in a form that is slightly insulting. You cannot have the unity of faith, acceptance, and a sacramental life on the one hand, and the stigma of going to church every Sunday and being greeted with the ''Oh, God, you're one of those'' look, on the other. ''You cannot sire or bear children, that part of you is crooked, an evil fruit of the Fall; don't be surprised if we don't include you in our extra-ecclesial activities.'' So all the official doctrine in the world makes almost no difference at all; it is the result of popular opinion, a stinking red herring. Thick mick priest is a homophobe, had his share in picking on the weak kid at school, and grew up with this attitude, mistaking it for orthodoxy. I have myself been on the receiving end of this, and I have known Roman Catholic parents to encourage homophobia in their children. I grew up in a homophobic house, where words like ''poof,'' ''pansy'' and ''faggot'' were used without much thought.

Being a compendium of church doctrines one can't expect the catechism to go into any great detail about homosexuality, but everything it says is rather noncommittal. Perhaps this is their idea of trying to fudge over the old ideas under the false ''hermeneutic of continuity,'' or fear of being accused of wanton bigotry without reason on the other, who knows? One Roman priest said to me once that he thought homosexuality didn't exist, and that homosexual tendencies were a temptation to sin rather than an ontological reality in the person. This is, of course, a factual statement about the reality of homosexuality in the human makeup, there is evidence bearing on it, so this man's personal opinion on the matter is completely irrelevant. I daresay that this homophobic individual would be one to support such unscientific articles as this one, begotten of hatred and ignorance.

No, given everything I've just said, it's hardly surprising that Roman Catholics are eaten up with fear and paranoia about Mr Cameron's views, is it?
Posted by Patrick Sheridan at 6:11 pm
Email ThisBlogThis!Share to TwitterShare to FacebookShare to Pinterest