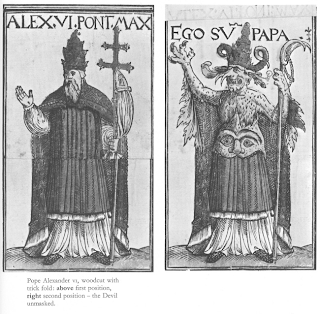 The pope is now using Twitter. Isn't that the greatest news since the Angel of the Lord announced the birth of the Saviour to the shepherds in the deeps of time? It's so wonderful, so critical, I am literally on the edge of my seat awaiting the next tweet! Oh blast, I've just remembered that I deleted my Twitter account so for my penance I'll take a few cold showers, recite some novena prayers, and pray to Our Lady, Queen of Social Networking (in the vain hope that her attention isn't elsewhere, you know, battling devils and shagging priests), that my share in the superabundance of graces no doubt impeded by my objection to such social networking sites doesn't impact on the state of my soul on the Day of Judgement. We can't have everything. Sigh.

Dear God! Anyone who has greeted this non-event with any kind of Ultramontane impiety ought to be shot. Roman Catholics say that they do not worship the pope, and this may be written in their doctrine, but their actions say otherwise. It's as if Our Lord has said, ''don't read the Scriptures, listen to my pope!'' 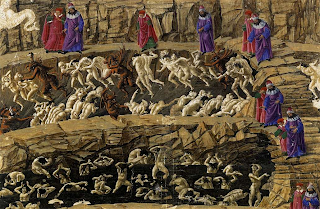 The fate of sycophants in the Divine Comedy by Botticelli, doomed to forever wade through their own shit. This may have been an early Renaissance play on the term ''brown noser,'' you never know.
Posted by Patrick Sheridan at 1:36 pm
Email ThisBlogThis!Share to TwitterShare to FacebookShare to Pinterest