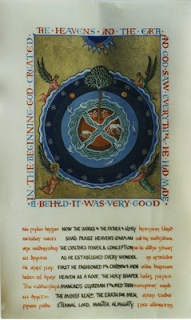 I was going through some of my old Latin stuff on file in my bedroom before I took my afternoon nap (rather later than usual), you know my translations of scripture (the complete Book of Jonah, some Gospel pericopes), bits of St Leo's Tomus ad Flavianum, odd bits of Virgil, and best of all some of my work on St Bede - all redolent of a time when my mind was more active. I came across my translation of the account of St Caedmon, who was a herdsman attached to the double monastery of Whitby during the abbacy of St Hilda. On the evening of a certain festival, as was the custom he went to dinner with the monks to celebrate, and a harp was passed to him. Now being innocent of the art of music he retired to his bed where he was visited by an angel who besought him to sing something. The passage goes:

When he heard this reply, he immediately began to sing in praise of God the Creator verses which he had never heard, of which this is the sense: ''Now it behoves us to praise the maker of the heavenly kingdom, the power of the Creator and his counsel, the things made of the Father of glory: how he, since he is the eternal God, stands out as the author of all miracles, who first, as the almighty Guardian of the human race, created for the sons of Men the heavens for a roof, and then the earth.'' This is the sense, not however the order of the words themselves, which he sang while sleeping; for neither are songs able, however well they are composed, to be translated literally from one language to another without loss of its decorum and dignity. But arising from sleep, he retained the memory of all that he sung sleeping, and soon added more words to the songs in the same manner, fitting for God. 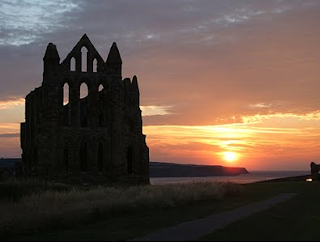 He paints a very moving picture of God, very typical of St Bede, whose piety and learning were surpassed by none in his life. The Old English staves, of which St Bede gives a Latin translation, exist in an Old Northumbrian edition of the Historia Ecclesiastica commissioned by godly King Alfred for the edification of his people. The song was written in the alliterative metre, beloved of Blessed Ronald Tolkien, which is produced here:

There are some interesting syntax and forms here; the cognate wuldor in ''glory-father,'' used as a kennings for God throughout much Old English poetry, and the constant repetition and pattern of ideas, inherent to the genius of alliterative verse. Most obvious of all, naturally, the form middangeard, the ''Middle-earth,'' which to the Saxons meant the lands of men between the Seas, or not seldom between Heaven and Hell (see the poem Crist by Cynewulf). The significance of the Old English translation of St Caedmon's Hymn cannot be underestimated. According to C.L Wrenn, writing for The Anglo-Saxon Anthology:

If this poet was, in fact, the very first to apply the Germanic heroic poetic discipline of vocabulary, style, and general technique to Christian story and Christian edification, then, indeed, the Hymn must be regarded (as it must have been at the time of its original recitation) as a great document of poetic revolution in early Anglo-Saxon England. Whoever first applied pagan traditional poetic discipline to Christian matter set the whole tone and method of subsequent Anglo-Saxon poetry. He preserved for Christian art the great verbal inheritance of Germanic culture.

How wonderful. This was Tolkien's life work! It is interesting that he established such an ecclesiastical connexion between the Old English tradition and his own legendarium, dedicated to England (not Britain), and mediated by pious works. It is the foundation, and subsequent ethos, of the work that is Christian, not trite things such as Gandalf's return from death seen as a type of the Lamb of God sent to slaughter, though that too is measurable. It's what distinguishes Tolkien from lesser authors.
Posted by Patrick Sheridan at 9:40 pm
Email ThisBlogThis!Share to TwitterShare to FacebookShare to Pinterest