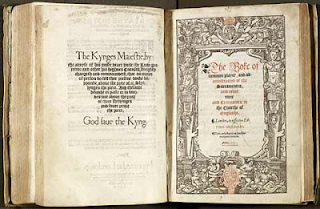 According to this sweeping statement over at Style-over-Substance (no, that's not its real name; that is a name I invented to better account for the constant tat) Roman Catholics overwhelmingly support the new translation of the Roman Missal. Never mind that this survey was completed by just over 1,000 Roman Catholics (out of 1 billion), that it was only done over an eight day period and all the things I've (and I'm sure you've) heard about the new translation.

The new translation is complete and utter rubbish. Roman Catholic liturgical and ecclesiastical affairs are just doomed to eternal artificiality as a result of it, and the latter day history of approved vernacular liturgical books. By the 1960s it was really too late. Rome can't seriously look to the Prayer Book or the King James Bible for ''liturgical'' English in the Latin Rite (notwithstanding the new craze for Patrimony brought about by the Ordinariates) as these are the compositions of their time, and a modern ''liturgical'' and vernacular language in the Latin Rite just raises a host of questions about the place of Latin, the relationship of great choral music to contemporary liturgy, and other complex questions about what constitutes a ''liturgical language,'' if there is such a thing at all, pastoral questions, etc. They either end up aping Myles Coverdale and Lancelot Andrewes or producing something that reads like a noticeboard at the railway station; and who on earth has sentimental and religious feelings about the railway station? Rome has opted for the latter, and what a monstrosity! Conversations I've had with lapsed Roman Catholics (I am myself a kind of lapsed Catholic) tell me that they find it all irrelevant and condescending. You may think that their opinions are not worth considering but they are in many ways the salt of the earth, and if you're trying to win them back by a verbose, ugly translation then good luck!

But who cares? Religion blows anyway.
Posted by Patrick Sheridan at 10:32 pm
Email ThisBlogThis!Share to TwitterShare to FacebookShare to Pinterest